Wickedness in the world today 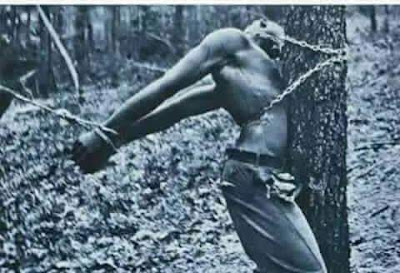 Wickedness in the world today
I was in a memory zone, when this picture came to mind. Yes,many of us have known from history how wickedly, the white had dealt on black people.
It was not enough that the white forcefully took their fellow equal into slavery, to make it more injurious,the blacks were completely striped of their every right, including the right of expression. If any black was found complaining of any mistreatment or any danger to his life,,he was not only beating, but was marked on a stake.
How foolish the whites were to ever think, the blacks have neither right to live as humans, nor right to possess natural feelings. How wise in turn were the blacks,who in a strange land could not sell off their dignity as man,but continued to fight and shout,until their voices were heard!
Humans, suffer to get what they need. The whites who maltreated the blacks never knew they refined them to getter a better us. Today, we are fine,rich,and admired. Yes,man’s wickedness sometimes brings blessings,but it is at first,an injurious abuse!!!
Tags: AbuseAdvice TipsEducation
Previous Post