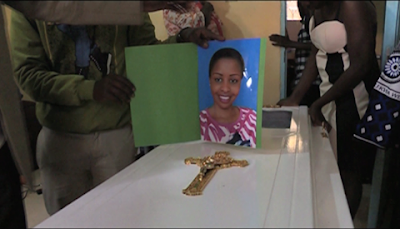 ”Brenda Akinyi Waru committed suicide after she was bullied online as she tried to find justice for her three-year-old daughter who was allegedly defiled by her ex boyfriend.” This was the caption of the news  about a 29 year old lady who committed suicide simply because she was bullied by people on social media for not getting justice over the death of her baby girl,who was said to have been violated by her ex. Sorry Brenda Akinyi. You are still growing!! Read more :How a victim of rape committed murder


Part of the story also has it that this 29 year old Brenda in seeking for justice over the death of her baby girl,even went having s*x with a police man,thinking that he could be of help to her in getting the justice she wanted. Is police a lawyer Mss Brenda? What actually made you to kill yourself by hanging when the court has not given their verdict? Is it because your ex violated your daughter or because a police man sapped your milk without fighting for you? Yes,none of the two is a sweet smelling experience,and yet,none of them is deserving of you,taking your own life. This is the report from a reliable source below:

“This lady was going through a lot before she took her life,. Her child was molested by someone she knows, she went to the police to get help but unfortunately the police officer requested sexual favors in order to help , in her desperation she gave in but he turned around and left her hanging, on to of all that, she was battling with depression. She went to a popular group online seeking help but her story was too sketchy so people started asking questions. She may have passed on but her child still needs help and justice. A child molester is still walking free”

Mss Brenda Akinyi,now you have committed suicide,who then will finish up your fight for you? Remember you said that your child was molested by your ex,what then will be her fate now you are no more?

The truth is that,suicide cannot and will never be a course of justice for anything. Most people who have committed suicides have done so because of shame. ”How can I live and face this shame all my life? Let me die and forget about it all”  are always the expressions coming from the heart of weak minds who think that by committing suicide,everything will be forgotten. They lie! They lie because,at committing suicide,their ugly stories go wider and viral,and their names never depart from the stones of generations.

There is no situation that justifies suicide. However,serious matters are better forgotten and buried when one finds strength to fight it,rather than committing suicide!!