Who Is This Traditional Ruler Implicated In Robbery And Murder? Take A Look!

by JoJo
in Hot Topics
0 0
0
0
SHARES
0
VIEWS
Share on FacebookShare on Twitter
Wonder shall never end in the world of Africa! If someone asked you for example,what kind of person you think should become a traditional ruler of a land and people,you would surely say ”a man that is upright,blameless and just right?” You could also say that such a man should have a long moral standing with no record or traces of evil or badness!
You are right! And I would suggest the same thing too for any one wanting to be a traditional ruler of any land and people.
In Delta state Nigeria,Ekpan community precisely,a traditional ruler,was arrested and tried in the court of law over criminal and murder cases. And guest what? While those who believed that a man such as a traditional ruler in the land of Africa,who should be a strong custodian of  African culture would never get himself involved in such crime this man actually was guilty and failed the test of moral standard!
The name of the traditional ruler who was found guilty of murder and robbery charges is Chief  Newton Agbafodo. 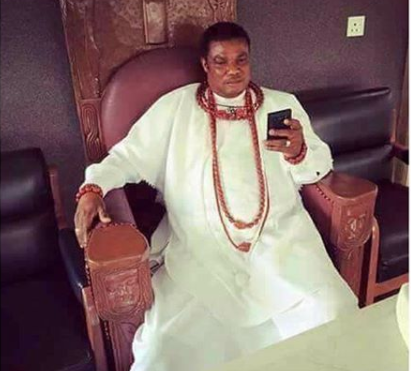 Chief Newton Agbofo.
Could you imagine that? While wayward,touts hopeless notorious are the ones usually found guilty in criminal cases,a man with chieftaincy title accorded with all honor and respect also got himself involved in this shameful acts.
Here are the full charges of the crime so committed:
”Charges preferred against him were conspiracy to commit murder, the substantial offence of murder, conspiracy to commit attempted murder and an attempted murder.
According to reports, he was alleged to have been linked to series of killings within Ekpan and its environs, including the murder of one Edigbe Ikpesa sometime in Oc­tober 2012. He was also implicated in the Delta Mall robbery/wanton de­struction in January, 2016.
Chief Newton Agbafodo has sentenced by the Delta State High Court 4, in Asaba, after being found guilty of all four count charges  preferred against him. He was sentenced to death by hanging!!!”
Tags: News
Previous Post