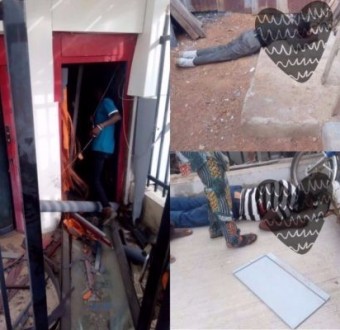 We know there is no unity in a multi political system in Nigeria,but at least,shouldn’t they have one vision and  mission? If all existing political parties in Nigeria believe that their single objective is service and humanity,why would not all support the ruling party in power?
It is always blames on the ruling political party whenever a disaster strikes!
During the former political party in power- People’s Political Party (PDP),there was the issue of Boko Haram insurgency and this was blamed on the PDP. The strong opposition party APC said PDP was incapable of handling state security thus,the invasion of Boko Haram insurgency.
PDP lost to APC and now it’s been one problem after another. It is still the same Boko Haram insurgency. And now,economic recession and most recently, robbery attack in one bank at Offa town in Kwara state Nigeria. All of these problems are blamed on the present government,APC!
One of the big voices of PDP that usually blames the present APC government in Nigeria is governor Peter Fayose. Here is his take on the present robbery attack in Kwara state :

Well,if you know Nigeria so well,you would discover that robbery attack is as old as Nigeria herself. There has never been a time when Nigeria had a strong security system. Armed robbers could be robbing in high places, at town halls,on a busy road,banking industries,in front of police stations,robbing people on a broad day light and still go free without being caught!
What has Offa bank robbery got to do with failure of a particular government? Has any government in Nigeria done well in the area of security before?
That is it! we don’t like talking about Nigeria politics because this is how it sounds,but for goodness sake,Nigerian politicians should be reasonable!
Stop blaming any government  for certain disaster which the other government could not prevent or control!
If I were in politics,I would urge my members to unite in one voice and give support to any party in power since the vision of all is service and humanity!
No one or particular government can succeed if the opposition party is always on the watch out to see disaster and crime prevail in the state.
Then the big question: How would you politicians of Nigeria succeed in your mission to serve humanity when your subjects are always at the mercy of their killers???
Tags: News
Previous Post

And You Expect Shantel To Leave Lover Because Of Rape Accusation?