”We Are In This For Better And For Worse,In Sickness And In Health…”-Osasu Igbinedion

”Photo: We are in this for better and for worse” – Osasu Igbinedion 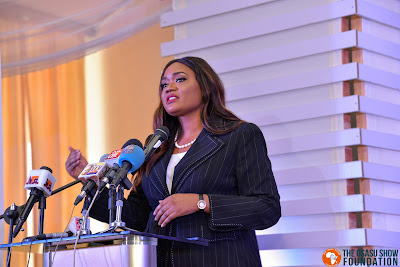 Well,Osasu was saying this at her show Symposium held on Friday, August 25th 2917 at the International Conference Center, Abuja with a theme #TOSSYMPOSIUM17 ‘The New Economy and Its Impact on Less Privileged Citizens’.

The movement of the Indigenous People of Biafra,IPOB,to disintegrate from Nigerian government and have their own sovereign state is not a welcome idea to Miss Osasu Igbinedion. She implies in her speech that everyone,the Igbos,Yorubas,Hausa and other none majority tribes in Nigeria have been together for years in Nigeria as one when things were good,when economy was thriving! Why should anyone now think of moving out of Nigeria system now the economy is bad and shaky? So she says: ”We are in this for better and for worse,in sickness and in health,in recession and in economic bloom.”

Among those in attendance at the symposium were Honourable Minister of Transportation and Former Governor of Rivers State Chibuike Rotimi Amaechi, Executive Governor of Abia State Dr. Okezie Victor Ikpeazu, Director General of Nigerian Maritime Administration and Safety Agency (NIMASA) Hon. Dr. Dakuku Peterside, Former Governors of Akwa Ibom (Obong Victor Atta), Delta (James Ibori), and Edo State (Lucky Igbinedion),and others. ”we are in this for better and for worse,in sickness and in health…” Osasu Igbinedion. 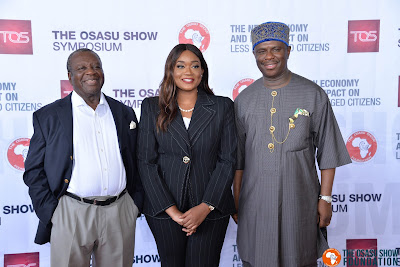 Dear Osasu Igbinedion,we love your boldness! We also love the fact that somehow,you love togetherness of people,that all people should be and stay as one! But,did you also notice dear Osasu, that there has been marginalization suffered by certain groups of people in Nigeria? Are you in your many words and convictions saying that some people should continue to suffer at better and in worse moments? What do you stand for Miss Osasu,because most of us here stand for justice and equity!

I stand for justice,and I am saying : ”Some group of people have suffered enough in both good times and bad times while just few people enjoy the dividend of democracy ! It is high time some people left to reconstruct themselves,find themselves in their roots,and begin to develop their economy! Those who say they want to leave should be allowed to leave either for good or for bad!

You have spoken your mind on the issue of ”Nigeria Unity”,saying: ”We are in this for better and for worse,in sickness and in health,in recession and in economic bloom !!Let other interest group have their own say madam Osasu!!!

A lady killed herself and her fiancee for ending their relationship?

A lady killed herself and her fiancee for ending their relationship?