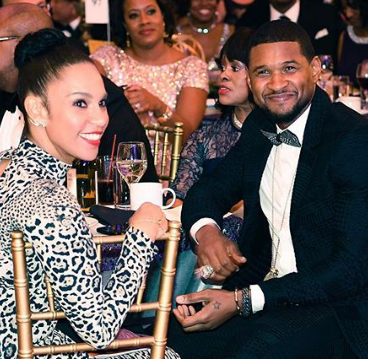 Even when one is not yet married,one would still know that divorce is not always easy. breaking up  in relationships with someone one has been so acquainted with is not easy,how much more those in marriage whose hearts are tied with 3 powerful cords!
Accepted. There are situations that can result to divorce and separation among couples. One and the strongest situation or reason is infidelity or unfaithfulness to one’s partner ,and in situation where the one being cheated on cannot forgive his or her partner,then divorce becomes a legal case.
Couples do not separate or divorce when they still have love for each other. When they are still interested to live and build future with each other,the idea of divorce doesn’t come to mind at all rather,ways to settle and solve marital issues come in. The good book even says: Love covers multitude of sin!
Usher and his wife Grace Miguel are getting divorce. In fact,they have already appeared before fans and public and announced they are quitting their two years marriage relationship.
Do they no longer match or fit for each other for marriage? Here is their response to USWeekly:
“After much thought and consideration we have mutually decided to separate as a couple.”
They continue:
”We remain deeply connected, loving friends who will continue supporting each other through the next phases of our lives. The enormous amount of love and respect that we have for each other will only increase as we move forward.”
Deeply connected? loving friends they said? This is really strange in the world of love and affection!
When love and respect,and feelings connect two hearts together to say ”I do”,how is it possible that this lovely couple are separating when they still feel something very strong for each other?

Looking at these people,it doesn’t look they know what they are saying. They really look like two hearts that beat as one,looking oneness in heart and in body!
In fact Usher is not serious divorcing or separating from his wife for any reason!
‘The past year has been a tough one for Usher and Grace as multiple women have come forward accusing the star of giving them herpes’‘ says a report.
Tough,but you guys have still been moving on with large feelings for each other. That is love! The only thing that should continue keeping you both in your marriage regardless of whatever!
Grace like seriously,you are leaving your husband of two years because multiple women have accused your husband of giving them herpes? Can’t you learn from the world women champion,Hilary Clinton?  Did you know how many times her husband Bill Clinton was accused for engaging in infidelity,even with Monica Lewinsky? Hilary Clinton did not only hear that her husband was engaged in extra marital affairs with other women,she also was convinced. Yet,she maintained her place as the one and only wife of Bill Clinton that everyone knows no matter what.
Usher is not serious,divorcing his wife for this reason,neither is grace Miguel any serious at all!!!
Tags: single & Married
Previous Post

This Is What The Concept Of Sugar Daddy Has Changed To. For Young Girls Only

This Is What The Concept Of Sugar Daddy Has Changed To. For Young Girls Only