“There is no way I will advise my son to forget the agitation for Biafra” says the father of the IPOB leader Nnamdi Kanu to the federal government.

”Re-arresting my son will definitely cause more problems
for the country.”-the father of Nnamdi Kanu 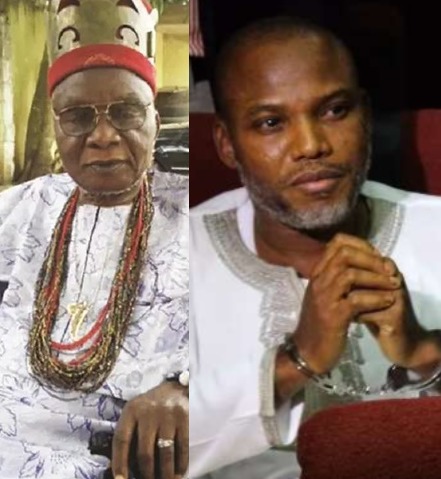 The father of the Indigenous People of Biafra, IPOB, Isaac Okwu Kanu,has said that the plan of the federal government of Nigeria to re- arrest his son,the IPOB leader,Nnamdi Kanu is to kill him for his agitation of Biafra.He says that the plans by the Federal government to re-arrest his son would only bring more
problems than solving any in his latest interview with the Sun. See his full speech below:
“When they talk of re-arresting him, it means they want to kill him, but God will not allow them because my son has done nothing wrong. I am using this opportunity to call on the United Nations to call the Nigerian government to order because they are planning to kill my son. My son did not do anything; government should go after those who have committed offence against Nigeria
Re-arresting my son will definitely cause more problems for the country. Why would they re-arrest my son; to kill him? God and our people will not allow that to happen. They should realise that Nnamdi has a boy he has not set his eyes on since he was born and it was out of respect for the laws of the land that made him not to go to London to see that boy”.
Giving his fact that the plan of federal government to re -arrest his son is to kill him,Kanu further questions federal government:
Why will they want to re-arrest him? Did he kill anybody? Did he flout the constitution? Some people are saying that my son, flouted the bail condition given him by a Federal High Court in Abuja, but the question remains, what type of bail condition was that? Is it possible that a person of my son’s standing in the society could stay without meeting up to 10 persons in a day or week? So, the said bail condition was against his fundamental human rights. But that not withstanding, I know what we are passing through in my palace; trying to stop people from coming here, but there is a limit to which we can do that. Initially, the major gate to my palace had always  been open, but since he came back, that gate has always been shut and we did that to stop people from gaining access to the compound. So, I don’t know what they are talking about. The court in the first place never restrained him from moving about. So, in the course of going to see one or two of his friends and those people would organise reception for him, I don’t think there is anything wrong with that to warrant his being crucified. The question I have been asking since I heard about this planned re-arrest is whether Nnamdi is running away from the country? There is no way he would do that. Any day they want him to appear in court, he will quietly do that. I read the other day that the Attorney General of the Federation (AGF) and Minister of Justice, Abubakar Malami said the Federal Government did not arrest sponsors of quit notice to Igbo living in the northern part of the country because of the security implications. From what he said, it was not that the Arewa youths did not commit any offence, but the issue is that the Federal Government is afraid of what will come out of such arrests and allowed them to move freely. On the other hand, they are making move to get Nnmadi Kanu, who had done nothing re-arrested because they believe nothing would happen if they do that, but they may be making the greatest mistake. It is this treating people from a certain part of the country as being superior to others that is making the agitation for Biafra to gain momentum on a daily basis”.
Nnamdi Kanu’s father,reaffirms that he cannot stop his son from agitating the coming of Biafra:
“There is no way I will advise him to forget the agitation for Biafra ,because I told him from day one that I fully support him, because what he is doing is for the good of his people. So, advising him to drop the agitation now because of the fear for his life would not be ideal. It is bad for one to be marked out for elimination because he said the truth”.
Tags: governmentNews
Previous Post

”The president in office is not the one I voted for,so why should he succeed?”-Adesina,the Special Adviser on Media and Publicity to President Muhammadu Buhari

Tips on how to enjoy a better relationship

Tips on how to enjoy a better relationship