There are really insane customs and traditions that people respect –

An alleged man stripped naked and forced to swear an oath 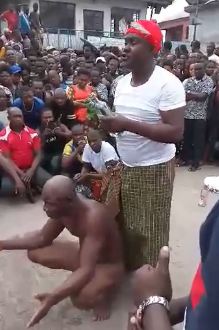 Honestly speaking,there is nothing wrong with laws and traditions situated in the land of the living,but when laws subjugate or subdue human dignity,they become insane. This reminds us the wisdom of Christ when he came to earth. Seeing that the Jews honored their customs more than their own people,to the extent that on Sabbath day,no one goes to the a hospital,no matter how sick he was or performed any other reasonable functions,all because of the Sabbath laws.

How could a man,a full flesh man,a husband and father be stripped naked only for mere allegation,having been accused of committing murder.

The point is that the man stripped naked has not yet been found guilty. In their tradition,once a finger points at someone,claiming that he has committed any abomination he will be stripped naked and be made to swear an oath.

Why some traditions such as this is really insane is because,let us assume that the accused man is innocent at the end of the day,how will they later appeal?  How on earth will they say they are sorry and make up the lost? You strip a man completely naked and people gather around him to see everything and all you could say later is ”I am sorry”! What do you mean?

Okay,apart from the fact that swearing is one of the ways to testify ones innocence,what if a victim says that his conscience and fate is against swearing? Well,in such traditions,it is even a taboo to question the order of the tradition or the custom of the land. Indeed,there are really insane customs and traditions that people respect!!!!

How Troubles and Trials make a better you –

How Troubles and Trials make a better you -