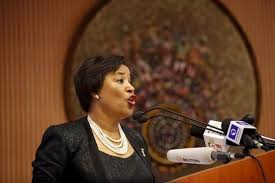 You know,the basic objective of the present Nigerian led government APC is to fight corruption. The government headed by president Mohammadu Buhari So much believes that the past administration under PDP sapped and looted the national treasury,thus making it very difficult for Nigeria economy to thrive.

All along since assuming power ,the Nigerian  government has been fighting corruption but to no avail. It seems the more it tries to arrest and discover looters,the worse corruption increases.
At the Commonwealth meeting yesterday,the Vice President Professor Yemi Osinbanjo listed reasons why it has become so difficult for Nigeria to fight corruption to the end. See below:
The theme of the Commonwealth meeting was ”Partnering Towards Assets Recovery and Return”.
Below is the keynote speech given at the meeting by Osinbajo:
“Dismantling the conspiracies that facilitate export of stolen assets is probably as important as the theme of this conference,
“Partnering towards Assets Recovery and Return”.
“Article 51 of the United Nations Convention Against Corruption states unequivocally that return of assets is a fundamental principle of the Convention, and mandates States Parties to afford one another the widest measure of cooperation and assistance in this regard. Similarly, Article 16(1) (c) of the African Union Convention for Preventing and Combating Corruption obligates States Parties to adopt such legislative measures as to enable repatriation of proceeds of corruption.
“The effective implementation of these Conventions depends to a considerable extent on the willingness, cooperation and the assistance of States in the areas of mutual legal assistance (MLA), law enforcement cooperation, asset recovery and return, and technical assistance. “Regrettably, the procedures to obtain Mutual Legal Assistance to seize, confiscate and repatriate proceeds of corruption are often complex and problematic, and in urgent need of reform.
“The absence of a legal basis for cooperation in some countries, differences in legal and procedural frameworks, language barriers, bank secrecy, jurisdictional issues, a lack of funding are some of the obstacles standing in the way of effective mutual legal assistance. I’m pleased to note that there is evidence of a renewed commitment to collectively identifying the most effective means of overcoming all of these existing legal and technical obstacles to asset recovery and return.”
Osinbajo continued:
“The 2014 report claims that developing countries lose $1trillion annually to corporate transgressions, most of it traceable to the activities of companies with secret ownership,”
“Another report that may enjoy a major mention here is the 2015 report of the High Level Panel on Illicit Financial Flows from Africa. Chaired by our guest of honour, former South African President Thabo Mbeki, the panel stated in its report that Africa had lost over $1 trillion over a 50-year period and that Africa loses more than $50 billion annually to illicit financial flows. Most of these illicit flows are perpetrated in the extractive sector and through companies with hidden ownerships.
“The cost of corruption therefore imposes on all African countries and governments a moral obligation to fight it with vigour and political will, by strengthening all institutions and systems involved in law enforcement as well as in promoting a culture of transparency and accountability.
“While public sector corruption is the usual focus, the private sector’s complicity is significant, as when large multinational corporations engage in tax evasion or transfer pricing.
“But it is the complex web of public-private collusion and connivance that results in proceeds of corruption ending up in foreign countries and especially in their financial institutions and systems.”
When Osinbajo asked the heads of anti-corruption agencies in Common Wealth  to collaborate to fight corruption and assets recovery,the Secretary-General of the Commonwealth  Scotland said:
“Globally, we are facing a Tsunami of Corruption. In 2015, UNODC estimated that the amount of money laundered globally each year is 2 – 5% of global domestic product or between $800 billion and $200 trillion.
“It is estimated that corruption costs the African continent over $148 billion per annum.
“You, the heads of anti-corruption agencies, will be seeking to meet this challenge. You are leading the fight against this Tsunami.
“You are the early warning mechanisms, the rapid responders, mobilizers; you put in place necessary, critical measures that enable us to build back better.”
She continue:
“It is prescient that we are gathered here in Abuja at the invitation of the Economic and Financial Crimes Commission of Nigeria, which under the excellent and forthright stewardship of its Acting Chair, Mr Ibrahim Magu continues to effect real change and deliver positive results.
“I also want to recognise and applaud the distinguished efforts of Professor Bolaji Owasanoye and his team at the Presidential Advisory Committee Against Corruption in promoting the reform agenda of the government on the anti-corruption effort.
“We also owe His Excellency President Buhari immense gratitude for his wisdom and leadership.”
Tags: News
Previous Post

Nigerian Lesbian Couple Celebrate 2nd Anniversary. What They Share With Friends Are Quite Touching.See Here

Ex-Beauty Queen Says This Is The Only Condition That Causes Domestic Violence. Find Out Here!

Ex-Beauty Queen Says This Is The Only Condition That Causes Domestic Violence. Find Out Here!