The men who dump their wives in hospital for giving birth to triplet,female children

Photo : Mrs.Rashidi Bello,offsetting the hospital bill of a woman whose husband ran away,for having triplet. 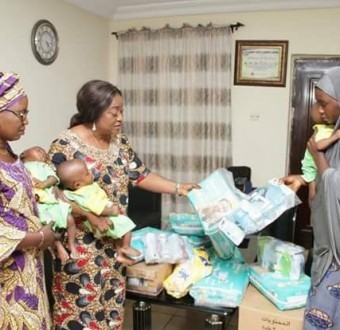 There is no doubt you have heard and read like I have always done,about how husbands would abandon their wives with their babies in hospitals,for giving birth to either triplet or female children. Aren’t these crazy? You got your wife pregnant and on the 9th month,on the day of delivery,she pushed and three babies came out and all you could do was to run away? What kind of man are you father of someone??

The issue of husbands leaving or abandoning their wives and children in hospitals for giving birth to triplet is not just funny, but unimaginable! This action is more like somebody who makes an order for something unseen,and on getting the reality runs away from it. It is also more like someone who gives all he has and travels abroad. Then on getting there,he finds out that the challenges are so much for him to meet and all he could do is to run away to another country thinking it could be easier there. He fails to accept the truth of life that one,this world is not a bird of roses,two,whatever you sow,you reap,and three,we all must accept what we can not change!!

The issue of running away from ones responsibility is making a woman look stupid and unreasonable. Yes,we all know that the only thing that can make a man abandon his wife and children in hospital is poverty. No doubt such men expect to have just one child at a time,only to see three at once. The whole situation looks as if a woman knows the situation at home,that they are not capable to take care of more than one kid at a time and she goes and picked three babies and put in her stomach.

Again,the issue of leaving a woman and her babies in hospital simply becomes she gives birth to female children is absolutely childish. Who gives children? You or your wife?  Noo,let’s face the fact: Apart from the fact that God gives children in his own way and time,he has also deposited male and female  chromosome, in the man to produce his own baby,and not in the woman. How can a man have rice and beans in his possession and when all he could release to his wife  is rice,and after cooking and presenting it to her husband,he gets angry and abandons her with it. Is this reasonable? Is it fair??

Listen, dear men,fathers and husbands!  The earlier you start taking your responsibility the better for you. What your wife gives birth to is your produce,your baby,they are gifts from God!  You fear that you can’t take care of the babies right? But you can. God,who gives you the babies,will surely open his hand and satisfy the desire of your heart in order for you to take care of his children,in your care!!

Finally,let this be a statement of warning to all of you who already have one,two or three children and still go for more when you know that you are not financially capable.  You never can tell,the next one you might go for might result to having twins or triplet which whether you like it or not,can never run away from it!  They are your produce,and your responsibility!!!!

The truth behind Ozubulu massacre that will shock you-

The truth behind Ozubulu massacre that will shock you-