”Stop Blaming The IGP For His Poor Reading.He’s Got Too Many Academic Certificates”.See More Queries Here! 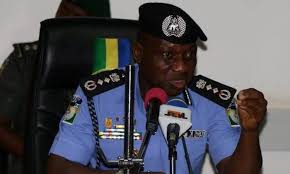 One of the queries was on illiteracy. Arase had wanted the President to know that the man he wanted to elevate has big problem with competency in reading but this was ignored.
The law of Truth proved itself right on Monday in Kano where the IGP was expected to deliver a speech written for him by one of his officers which he was to deliver while addressing his officers at an event.
From the video clip,not only did he stumble many times at the word ”Transmission” but he stammered and mispronounced it in different phonetic manners up to 28 times in a 2:19 minutes speech.
The IGP was said to be a graduate of Ahmadu Bello University where got his Bachelor Degree in Agriculture and another bachelor degree in law in the University of Maidugiri .
From the book,IGP Idris went to school,passed his exams and was rewarded with many academic certificates but he could not pronounce words such as ”transmission” fluently and competently.

”I just watched the video of the IG @PoliceNG and all I feel for him is pity. On such a big stage and in full glare like someone who was inebriated. He kept apologising for he knew something was wrong. I kept cringing. It’s so pitiful.IS THIS EVEN TRUE?- Aisha Yesufu wonders.

Well as a Linguist I would say this is not a case of ”Mistake” but ”Error.”
If it were a mistake that IGP Idris wrongly pronounced a word,at the repetition of it, he would have corrected himself. But look at it,he stumbled at the same word ”transmission” 28 times and still didn’t pronounce it correctly!
The writer of the speech presented by the IGP should have known that he would falter at words since he has incompleteness of learning and to avoid the mistake he should have allowed the IGP to present his speech orally rather than looking at writings.
On the other hand however,if the IGP were intelligent,he should not have tried himself knowing how incompetent he is in reading!!
Finally,the schools which qualified him as graduates with certificates should bear the shame and embarrassment of the incompetent display of their graduate!!!!
Tags: News
Previous Post

”I am Not A Politician.I am Prepared To Leave Politics At a Short Notice”- Nigerian Vice President,Yemi Osinbajo. See Details

What Do Men Really Want From Women??

What Do Men Really Want From Women??