So Victims Of Human Trafficking Pay This Heavily? 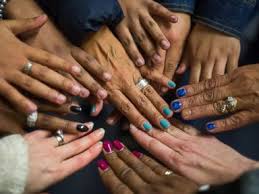 Photo: human trafficking in Nigeria.
Is this to say that it is not enough that some people are tricked with promises to have better future else where,and would leave home,only for them to be frustrated on the way by the so called helpers ,and the victims would be forced to pay heavily with their dear lives.
One report gives a clearer picture of this.It says:
”Many victims of human trafficking are usually made to swear to oaths and some of their body parts collected as collateral to make them pay back the money used to sponsor them.”
If victims of human trafficking could be subjected to swear an oath of course not to betray their masters or sponsors who get them across to their destination of their promised lands,why would  some of their body parts still be collected as collateral to make them pay back the money used to sponsor them? So victims of human trafficking pay this heavily?
What kind of humans are the so called sponsors who would subject victims of human trafficking to swear an oath which on a good day they would never choose to do and still move on to collect some of their body parts for collateral which will pay for their sponsorship into the so called promised land? How much would a sponsor pay for the trip of a victim of human trafficking that the victim would use some of her body part to pay as collateral? What then is the use of the oath which the victim takes on arriving their destination?  This is a pity that victims of human trafficking pay this heavily!
The issue of human trafficking is so common among people from Edo state Nigeria. Some big flashy ladies would promise little poor girls heaven on earth away from Nigeria only to make them pay heavily with their dear lives through the hands of native doctors. Seriously,the Benin Monarch frowns at this and gives the following warning below as stated by a report:
”The Benin monarch, Oba Ewuare II, has forced the native doctors to revoke the curses and oaths placed on the trafficked victims.
The Benin Monarch declared that the trafficked victims were now free from their traffickers and whatever oaths they were placed on.
Oba Ewuare II also placed a curse in human traffickers and those aiding and abetting human trafficking in the state.
He cursed the native doctors who subject victims to oath of secrecies, violators of the order banning Community Development Associations and others whose business is to initiate the sons and daughters of the land into various cult groups.”
Oba Ewuare II warned those aiding and abetting human trafficking through the use of black magic and subjecting them to the oath of secrecies to desist from the act or face the wrath of the gods.”
He continued:
“The palace is not against those practicing the act of native doctors but those who use it to perpetrate evil in the land through aiding and abetting human trafficking in the state.
“We want to use this medium to tell those who are under any oaths of secrecies that they are now free. We revoke the oath today.
“What the Palace stands for is peace and the development of the state. I want to use this medium to tell you that the act of using charms to aid trafficking, the palace seriously frowns at it.”
If this is how much victims of human trafficking pay,then everyone should realize that it is absolutely senseless for any girl to succumb to promises of anyone who claims to help,only if she could move out of her country to a distance land,a journey, she can’t afford to make.
Ladies beware!!!
Tags: News
Previous Post

Is This Why Yvonne Nelson Got Pregnant Out Of Wedlock?