”Since Federal Government has failed Nigerians In Education,Should They Also Deny Nigerians Right To Life”?-ASUU 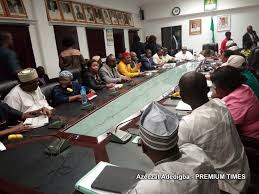 The Academic Union of Universities ASUU,has condemned the federal government of Nigeria for doing nothing while hundreds of people die in cold blood from the hands of herdsmen.
ASSU chairman of the university of Ibadan Dr.Deji Omole describes as irresponsible the Buhari led government and questioned whether the government would fail in every thing including in giving Nigerian citizens the right to life.
In an interview with the pressmen shortly after congress of the union in Ibadan,Dr. Deji Omole maintained that the government that allows its people to be murdered on a daily basis without doing anything to bring a stop to it is an irresponsible government.
According to Omole,the government that watches its subjects killed and properties vandalized and approves only ten million naira for rebuilding affected communities instead of preventing the destruction from happening is irresponsible:
“A serious government would have prevented destruction from happening but the government allowed the carnage to happen.”
He further said:
“every day you open newspaper and what you read is news of killing and some people will sit inside air conditioner offices in Abuja and issue condemnation speeches which have not done anything in the last three years since they came to power. If Nigerians are already denied quality health facilities, quality education, quality social services, they must not be denied right to life. This is the worst form of treating the governed by a government that promised  hope to the masses but which the rich have continued to benefit from. We demand security of lives and properties from the Muhammadu Buhari government. Only the living can demand for other rights. It is sad that one state claimed to have lost about 500 persons to herdsmen terrorism and nobody has been prosecuted for this”.
Tags: News
Previous Post

Principles On How To Become Wealthy By Reno Omokri

Principles On How To Become Wealthy By Reno Omokri