Should Ladies Also Propose To Their Boyfriends? 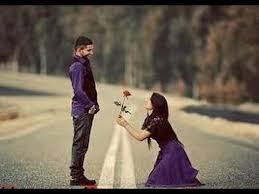 IS IT RIGHT FOR WOMEN TO PROPOSE TO THEIR BOY FRIENDS?

Hey people, answer this question please: “Is it right for a woman to propose to her boyfriend??” I asked you this because, a lot of people would not let me rest over this issue,therefore, I need your own opinions! Before marriage proposal featured into place,both parties, a man and a woman must have been in a romantic relationship to know quite well about each other. During relationships,both persons involved usually get attached with each other, body and soul! The love which begins with a very little impression grows into many branches, touching the heart,blowing the mind,and echoing the spirit. It is at this special point in time, that any romantic relationship should be taken to another level, which is marriage! Maybe it’s not true that women are always the ones hoping that their men,boyfriends should  spill their intentions. But what if men don’t, should women? Is it right for a woman to propose to her boyfriend?
See,men are often reluctant and nonchalant when it comes to real matters such as marriage. They would like to keep you ladies, single but not searching,always giving you hope,telling you when you are worried:”don’t worry honey,I have my plans okay? Just give me little more time”. This they would keep saying year after year until, there is no more twinkle in your face! Men! Men!! Men!!! This thing you people are doing to us, is it fair?
Now,let’s get down to the real business:Is it right for a woman to propose to her boyfriend?? Marriage proposal is when a man declares his good intentions to marry his lady. He asks her:will you marry me? If she loves him enough to marry him,she will say: yes,I will! Finish! Most often, because men are the husbands,and heads of families, who by marriage traditions would marry,and bring their women to their homes,and not the other way round, it is therefore, much more reasonable that men,should be the ones to propose to their women,and not vice versa. For people who who speak of freedom of expression and gender equality however, it is not bad,neither is it a sin for women to also propose that their boyfriends should marry them,when they strongly feel to do so. Dearest reader,is it right in your eyes for women to propose to their boyfriends??? You are entitled to your own opinion, but making others opinion look senseless is to intelligent honesty, an injurious abuse!!!