Should I Marry Someone Outside My Religious Faith? 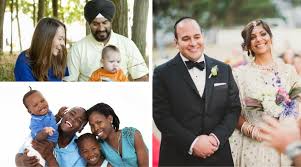 Well this seems to be an odd topic right? You don’t think it is necessary where there is love eey? You may say so but the truth is that religion and faith are two strong things that guild, control and protect   the lives of people .

No matter your race,where you come from,there is always the issue of religion,the religion which is practiced in your country,and which faith you belong. Religion is the major part of culture,which also controls how one behaves and tells the reason,why someone does certain things the way he does it.

Should I marry someone outside my religion?

Karl Max says that religion is an opium of people! This is to say that being part of religion can make one from a different family background,race and language group,dearly loved and appreciated. In fact,when a Muslim man in Asia sees a fellow man from Nigeria,it would look he has seen his own brother.

On the other negative side however,when that same Muslim faithful meets a Christian faithful who also is his fellow citizen in Asia,the same language and culture,everything looks like he has seen his enemy,or a total foreigner. His own brother from the same continent and culture! Should I marry someone outside my religious faith?

Simply put: Religion is the anchor of love and hate,but when love conquers religious differences,then that love has become stronger,and more important than that faith!

If one loves her religion so much that leaving it is not and will never be negotiable in her life,it is not advisable that such a person marries one outside her religious faith. The differences in their faith would soon make them two hearts that beat differently They would always see matters in different angles and perspectives. While one takes the right,the other takes the left. One body in marriage?

When a couple practice different faiths,the results affect their children and entirely their relationship. That family would become like one country,but different people! Should I marry someone outside my religious faith?

Read more here: Dump Your Marriage If It Is Not Working?

If there is any time getting married to someone outside one’s religious faith is advisable and good in the sight of anything good,it is if one of the parties,either the man or the woman is able to give up his or her own faith and follow the other.

This action would not only unite the family members,but strengthen the relationship! No two strong,different religious worshipers can really be one in a faith divided home,no matter the love! This is because,religion,being the opium of people,is stronger than love!!!

How Was Your Night? A Question For Romantic Partners Only?

Dump Your Marriage If It Is Not Working?

Dump Your Marriage If It Is Not Working?