Reasons why ASUU would not dialogue with the Federal government,to end the indefinite strike 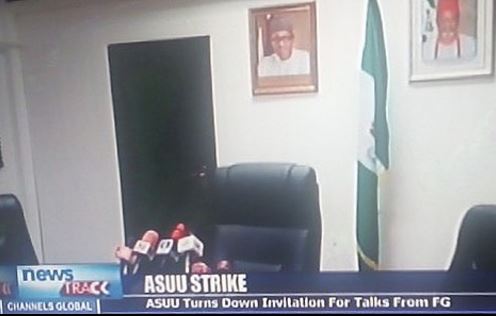 To be honest,the academic staff union of universities ASUU has requested nothing but the things that will put Nigerian state and federal universities into proper shapes. ASUU is fighting and asking the federal government to provide facilities for the smooth running of universities in Nigeria. Is this demand too much to attend to? ASUU is also demanding that their staff be paid their necessary dues to care for their welfare. Is the demand unreasonable? How can lecturers teach if their welfare are not put into considerations? You see the reasons why ASUU would not dialogue with the federal government to end the indefinite strike?

According to a report from AIT ,ASUU President, Biodun Ogunyemi, confirmed that the union will not attend the meeting saying ASUU has met, discussed the new offer from the FG and submitted a proposal to the government. ”The union will only honour another meeting after receiving a reply to their proposal from the government.” says the ASUU president,Biodun Ogunyemi. You see now why ASUU would not dialogue with the federal government to end the indefinite strike.

I beg the federal government of Nigeria to listen to the request of the proposal of ASUU for the sake of the students,the light and future of tomorrow. ASUU has said that they will not attend any meeting with you until they get a reply to their proposal! Please and please,do as they say for the sake of your children!!!

A 36 year old mother killed her disabled daughter,says she has right to do anything with her child

A BABY BORN WITHOUT EYES, DIED OF STARVATION,VILLAGERS,RUN FOR THEIR LIVES

A BABY BORN WITHOUT EYES, DIED OF STARVATION,VILLAGERS,RUN FOR THEIR LIVES