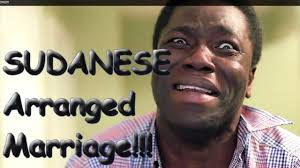 Naturally,when a man sees a woman he loves,he knows. His heart often bears him witness. He begins to watch her movement and attitude to be sure if she is truly the one  for him. On the other hand however,there  are people who ask that wives should be chosen for them.Is this really strange? Never mind. Everyone has their choices to make either to choose his wife by himself,or asks that it should be arranged for him. For those who rather choose that marriage be arranged for them, many of the kind have failed,and have failed woefully. One might asks: What are the reasons why arranged marriage does not succeed?

An African adage says that ones food can be another’s death trap. It is very simple. That one likes aunt K does not mean that another person will do the same. One may like aunt K because she is tall whereas the other might want an average or  even a short lady for a wife. There is one thing you should one about recommendation. It is that,when someone is out there to recommend something for you,he would have prepared himself to succeed. This  is how many have been blindfolded and have been persuaded to marry some people they never intended to go for,thus,ending up marrying someone else’s choice for marriage,and before you know it,that marriage would have been broken. This is a reason why arranged marriage does not succeed.

Another point why arranged marriage does not succeed is due to lack of compatibility. Incompatibility in marriage is like when AS gets married to another AS blood group. YOU know the likely outcome. Disaster thereafter. Incompatibility has ruin many marriages and this especially occurs when their is courtship or dating before marriage. This especially happens when people have already been arranged to marry each other. The idea to date or court then seems unnecessary since both have been seen fitting to each other by some people. This surely lead to reasons why arranged marriage does not succeed .

There is nothing as sweet as finding precious things as gold or diamond by oneself. When one finds his life partner by him or herself,he cherishes it more,and tries his best possible to live with it. Many arranged marriages have failed because,there is weak foundation on which it is usually built!!!

When and how should parents choose career for their children?