Photo: An officer who killed his wife 3 months after their wedding 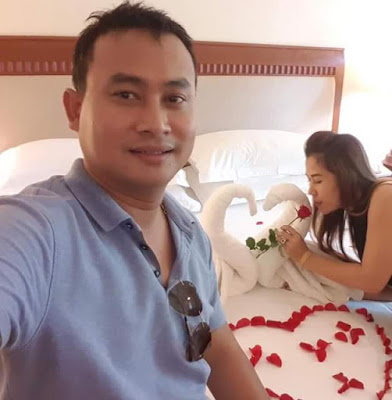 According to the report by the National Police Khieu Kounel, 34, shot his wife, Yeng Leakhana, 37, in the head inside their Meanchey district, Phnom Penh home. Why would he do this? Is it because his wife is older than he is? Is he just finding out? Let’s still see the reason why a police man kills his wife and himself 3 months after their wedding!

The report said a handgun and two bullet casings were found at the scene and that relatives claimed the couple’s relationship was marred by jealousy. How? And so?

“We have not been able to come to a clear conclusion,” Ly said. “We are launching a deeper investigation. We will try our best to figure it out.” Ly, deputy commissioner of the Phnom Penh Municipal Police.

Alright,while we are waiting for proper investigation on what made a police officer to kill his dear beautiful wife,let’s keep busy. You know before a man would marry a woman and bring her to his house,he must have loved her like he would himself. Recall also that the man after killing his wife also killed himself! Isn’t this strange that a man would kill his wife whom he loves so much? Isn’t it also strange that a man, a police officer for that matter would also kill himself? Let’s say that he discovered something that his wife hid from him 3 months after their wedding and that the only thing he could do out of disappointment and anger was to kill his wife,should he have also killed himself? What are we saying?  That a police officer kills his wife and himself 3 months after their wedding for no reason? I smell rat in the cupboard,and I feel that someone else must have done this to the newly wedded couple! Let’s watch and see!!!