Philadelphia Eagles Refuse To Stand For National Anthem,Hands On Heart. See Reasons And The Consequences Posed By Trump 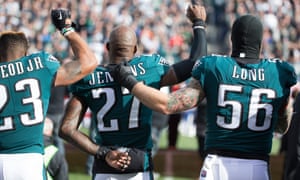 A good number of Super Bowl Champion of Philadelphia’s Eagles have refused to stand for national anthem,hand on their hearts.

“I am not going to stand up to show pride in a flag for a country that oppresses black people and people of color” says  Colin Kaepernick.

After winning the 2017 championship,the NBA champion Golden State Warriors were invited to the White House by Donald Trump as part of the victory celebration but some  of them declined the invitation because they disagree with Trump to stand for national anthem hand on heart:

“The Philadelphia Eagles are unable to come to the White House with their full team to be celebrated tomorrow,” . “They disagree with their President because he insists that they proudly stand for the National Anthem, hand on heart, in honor of the great men and women of our military and the people of our country. The Eagles wanted to send a smaller delegation, but the 1,000 fans planning to attend the event deserve better.”

@realDonaldTrump
The Philadelphia Eagles Football Team was invited to the White House. Unfortunately, only a small number of players decided to come, and we canceled the event. Staying in the Locker Room for the playing of our National Anthem is as disrespectful to our country as kneeling. Sorry!
3:55 AM – Jun 5, 2018
Below was the response of one of the players:

@TorreySmithWR
So many lies smh
Here are some facts
1. Not many people were going to go
2. No one refused to go simply because Trump “insists” folks stand for the anthem
3. The President continues to spread the false narrative that players are anti military
12:48 AM – Jun 5, 2018

@TorreySmithWR
There are a lot of people on the team that have plenty of different views. The men and women that wanted to go should’ve been able to go. It’s a cowardly act to cancel the celebration because the majority of the people don’t want to see you. To make it about the anthem is foolish
12:58 AM – Jun 5, 2018
Tags: News
Previous Post

President Buhari Praises Gowon For The Way He Fought Against Biafrans During Civil War. Read Here