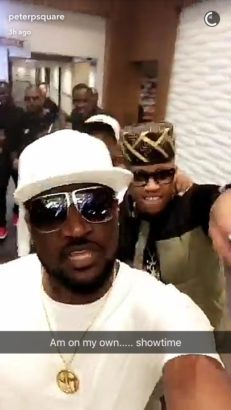 Let’s for once say: Enough is enough this time!” Why shouldn’t people mind their own businesses? Why can’t you tell yourself the truth?  Yes,humans are born naturally to be free,independent of anyone. That is what makes us humans we are. This explains why
the statement : ”No one is indispensable in life” is very true.

Peter and Paul were born twins by the same mother,father and on the same day.They started their music career as brothers,but definitely,Peter and Paul do not have the same gift. While one is  good singer,the other is  very good dancer,showing they belong to different worlds apart. What is wrong if two people decide to go separately once in a while? Husbands and wives sometimes go separately,the same are blood brothers,and life still goes on beautifully!

The marriage choices of Peter and Paul is even a clear statement that these born twin brothers do not have same interest in life. While one got married to a woman older than he is,the other chose to marry a younger person instead. While one decides to marry a woman outside his tribe and culture,the other chose to marry a woman from his own tribe and culture. This is a quite crystal clear of hand writings,on the wall you have been so myopic to see!

One is a singer and the other is a dancer,can’t you see? What are your fears anyway? That the twins will no longer have a successful career if they separate? You got it wrong! Will Paul or Peter die if one of them dies? So what are we saying?

Peter and Paul are not even identical twins from birth except they are both male,neither are they ever identical in anything they do in life! One of them is even rugged but you never noticed,yes!

Dear readers and fans of P2,Peter and Paul have tried being together for years as brothers,if they have decided to be apart,they have their obvious reasons to do so. Allow them,let them be,and let them have and enjoy the opportunity of what life could be when it is lived independently of the other. Whether they will succeed or fail,lies in their hands!!!.

…And so,Miss Turkey 2017,cheaply loses her crown to the second runner,lives to blame her past