”Our courtship didn’t even last for one week before we got married”. Gov.Rochas Okorocha talks about his marriage of about 30 years old

by JoJo
in Hot Topics
0 0
0
0
SHARES
0
VIEWS
Share on FacebookShare on Twitter
When  I saw a young lady packing tomatoes by the side of the road
I said to my friend, ‘this is my wife’. -Rochas Okorocha 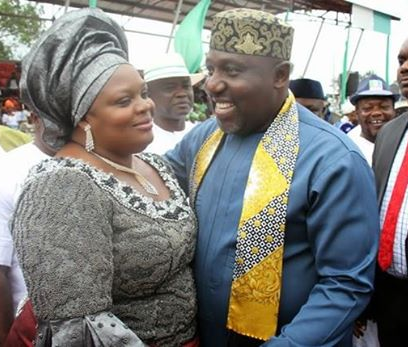 If there is any reason why no one can actually say between a long time courtship and a short time court,which is better than the other,or which makes marriage last longer,it is obviously because, the strength of marriage

does not depend on how long lovers have dated before getting married.

There are courtships of 2-5 years or more that could not produce a successful marriage at the end of the day while there are some forms of courtship,a very short one between a week and one year that have produced a better and lasting happy marriages.
In this article,we are fortunate to get a marriage of about 30 years old which courtship was just about a week old,yet,the marriage has been described as a happy one and it is still counting successes. It is the marriage of Imo state governor,governor Rochas Okorocha. Let’s find out why the courtship of Rochas lasted within a week and the out come so far. Read about it below:
Talking about when he began his search of marriage mate,governor Rochas says:, ‘I was quite young, about 24 years old then. My father fell sick and one day he told me he wants me to get married that he wants to see my wife before he dies and he was quite young then. That was how I began the search for a wife’.
He continued to say, ‘one morning I was driving and I saw a young lady packing tomatoes by the side of the road and I said to my friend, ‘this is my wife’. So we stopped and asked if we could help her and she said no and my friends laughed at me so we left but somehow I believed I have seen my wife. The next day I was passing in a bus and I saw the same young lady at the same spot with her sisters though I didn’t stop to talk to her that day but anytime I see her its always like stars shine through my eyes like I’ve seen something that’s not normal’.
‘Eventually, we met by accident at an event and that’s how we got talking. Our courtship didn’t even last for one week before we got married, I’ sure it’s one of the fastest marriages ever and today I can say meeting my wife, the first lady is the best thing that ever happened to me in life, believe me and I say it anywhere in the world to whoever cares to know. I’m blessed with the best family you can think of. I have the best marriage on earth. My wife doesn’t believe in gold and all these jewelries that women wear because our life is a life of service’ he said.
Finally,it is obvious that the key of a successful marriage does not depend on how long a couple have dated,but on the choice of ones’ marriage mate. Only marry a person your heart beats for in bearing you witness that he or she is the one and you will enjoy a sweet,happy and lasting marriage relationship!!!
Tags: marriage relationship
Previous Post

When we have children in schools such as this,what is government restructuring?