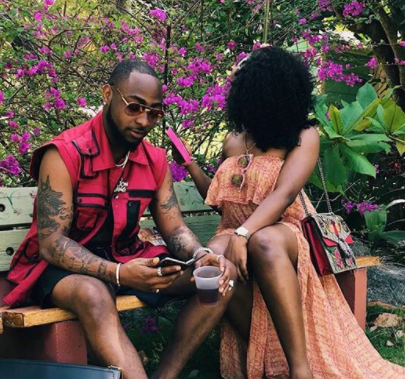 Are you serious? Davido has gotten another boo after the first and the second boos he’s had? Well,there was no quarrel,there was no fight in case you are wondering why Davido has discharged his former baby mamas .

The news is that Davido has now gotten another baby mama and he is so hooked up with her! In the lips of everyone is that his latest catch got Davido charmed with juju,black magic or voodoo or spell if you like.

It was confirmed however by the Zone 2 Police PRO, Dolapo Badmos,even though she is not a doctor or a spiritualist that Davido’s latest baby mama got him trapped in love with FOOD POWER! Yes,her DISHES!.

Read her proofs and convictions below: 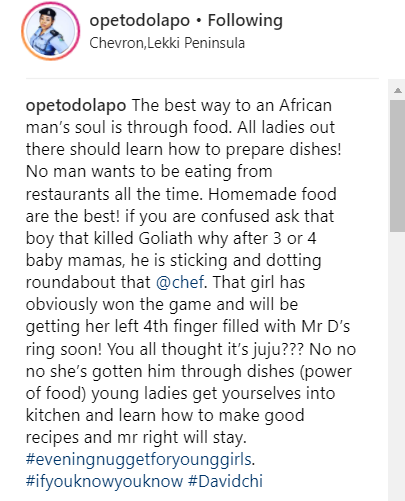 But really,I am somehow surprised that a person of Davido could be so heart hooked with Chioma because of food,what goes into his stomach. What kind of food could Chioma have given Davido that Davido had never eaten before? It must have been LOVE,not FOOD itself.

To prove,the person of Chioma and Davido are not from the same place or the same culture. But that is not to say anyway that Chioma could not have found out what kind of food suits and most dearly interests Davido.Hmm…

Again,we are not in any way suggesting or disproving that ladies,black and white shouldn’t know the basic of the kitchen. No they should! What are you going to a man’s house for as a wife if you cannot cook the food he provides and feed him well? Are you gonna be just there sitting as a beauty furniture for him to behold? Please save me that idea! No man is ever gonna be satisfied with just that! Ask your mother!

African men,no matter how English they look or sound like love to see their women cook and make homemade food for them. Take it to your heart!

If your man accepts that someone else cooks and brings for you and you think he is happy with it,my dear lady,he is pretending! One day,you will see him come real!

Yea yea,Chioma has obviously won the game and will be getting her 4th finger filled with Mr.D’s ring soon!You all thought it’s juju??? No no no she’s gotten him through dishes (power of food)!!!

”My Wife Named Our Son After Her Ex-Lover”. See Why And What Next!