by JoJo
in Hot Topics
0 0
0
0
SHARES
0
VIEWS
Share on FacebookShare on Twitter
IPOB members in the mud,subjected by Nigerian soldiers 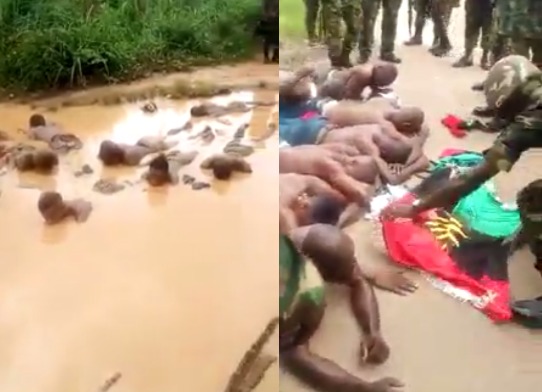 The fight between IPOB members in south east Nigeria and Nigerian soldiers is really getting out of hand. Just few days ago,on Sunday being the 10th day of September 2017,it was reported that Nigerian soldiers invaded the home of the IPOB leader,Prince Nnamdi Kanu in Abia state and in defense of their leader,
IPOB members came out,challenging the military with stones. Here is another news,reporting that Nigerian soldiers are subjecting IPOB members to severe corporal punishment,dragging their bodies in the mud. Why would soldiers do this terrible act to people they should protect? Here is the view of one of the readers:
Anonymous about 6 hours ago
This is a Conspiracy Theory! The Nigerian Army’s Operation Python Dance II is scheduled to commence on September 15 and run until October 15. The soldiers along with other security agencies are to be deployed to the 5 South-Eastern states of Nigeria. The reasons advanced by the Nigerian Government is hilarious. The real reasons for this current deployment are (1) to checkmate Nnamdi Kanu and IPOB’s call for true federalism or in the alternative, a separate Homeland because of the selective Injustice being done to the Igbo people, (2) to prepare to checkmate the Igbos ahead of he October 1st deadline issued to them by the irresponsible Arewa Youth Forum to vacate Northern Nigeria should the massacre of Igbos begin in the North and the Igbos wish to retaliate in the South-East. Within the period of this unnecessary deployment, the Judiciary, under the guidance of the Federal Government, shall revoke Nnamdi Kanu’s bail. The Army, and not the Nigeria Police as required by Law, shall quickly move in to arrest Nnamdi Kanu. In the process, the Nigerian Army shall murder as many IPOB members as they can. The recent unprovoked invasion of Nnamdi Kanu’s residence is a foregleam of the deadly master plan already in place. The Nigeria Army and affiliate security agencies shall attempt to cart away the many bodies of murdered Igbo men, women, and children to conceal the evidence. They shall be given strict instructions by the Federal Government to keep Nnamdi Kanu alive but would be equally instructed to assassinate him should IPOB members resist his arrest. The government’s propaganda machine including paid Sahara TV, Sahara Reporters, paid social media spin doctors, the Nigerian Television Authority (NTA), The Sun Newspapers, Premium Times Newspapers, etc are already strategizing to unleash a barrage of lies, propaganda, misinformation, and disinformation to deflect the truth about the vicious atrocities that shall be committed. If hundreds of innocent lives can be heinously murdered by the Nigerian Air Force at the Borno IDP Camp and no one is being held accountable till today, the Nigerian Government feels that it can pull off a genocidal stunt on IPOB members and the Igbos. If hundreds of Sheik El Zak Zaky’s followers, including harmless children, can be murdered in cold blood and given a mass burial, and nobody has been made to pay for this murderous crime till date, then the Federal Government has become emboldened to think that it can get away with the genocidal killing of peace-loving Igbos calling for equity, justice, and accountability. Please watch this space as this conspiracy theory unfolds before our eyes. If the Federal Government of Nigeria can condone the pogrom of Igbos and subsequently their genocide leading up to and during the Nigeria/Biafra Civil War of 1967-1970, they are very well prepared to repeat history in this era as no one has been held accountable for the previous crimes against humanity up till today. Let us hope this impending mayhem can be averted and lives of hundreds, if not thousands, of innocent Igbos can be saved.
For more update on the news Monikmotivational.com is dedicated to giving you more and more news!!!
Tags: News
Previous Post

”Norma,I am sorry I got re married,and our marriage didn’t work out..”.A husband writes to his ex wife.

''Norma,I am sorry I got re married,and our marriage didn't work out..''.A husband writes to his ex wife.