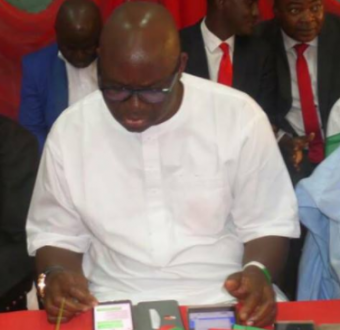 For the first time though,am able to agree with what the one and only people’s spokes person on societal issues,governor,Ayo,Fayose. They say he talks too much,both in matters that concern him and the ones that do not.

Recently,the Federal Government of Nigeria,through the arm of Nigeria Broadcasting commission,NBC,has has warned all radio and television stations in Nigeria,not to allow their callers participants or air their hate speeches in their stations. Any radio or television station which airs hate speech of callers shall pay the fine of 50,000 Naira. That is the news.

For now,not less than 50% of Nigerians have frown at this law,saying that it is an unfair law to make. But honestly speaking,isn’t this act,this law,a limitation to freedom of speech and expression??

Well,governor,Ayo Fayose like every other good and well meaning Nigerian has said that for NBC to make hate speech treasonable is a plot to silence opposition. Is this a hate speech from our dear governor Fayose? But anyways,he has spoken his mind and he has the right to do so!

Isn’t governor Fayose right when he said that Federal government of Nigeria to make hate speech treason a plot to silence opposition? What is this hate speech the government talks about?? I don’t know. All I know is that people say things in their own words and mannerism and words always hurt,when they don’t mean complement !

If there is anything that makes the government to make law against what they call hate speech,it is in order to silence the indigenous people of Biafra,who are seriously seeking their freedom from unnecessary  amalgamation,which has brought nothing but marginalization and unfair treatment to them! That is our take! What’s your own take on hate speech as treason???

Why on earth should gay be beaten to death??

The kind of human love we need: This is no lesbianism!

The kind of human love we need: This is no lesbianism!