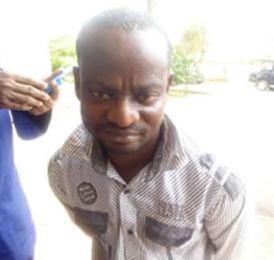 Photo:A lover or A ritualist?
This is more than unfortunate,not for the man,but for the woman who lost her life mysteriously after attempting to have s*x with her boyfriend in a hotel room.
The boyfriend took her to a hotel for the first time after 6 months of dating and on removing their clothes to enjoy s*x she began to develop high temperature,and slumped.
This is not the first time we are having this type of report of women dying either while having s*x with their lovers or after having s*x with them. But however,there has never been a report where legally married couples have experiences such as this as far as I can remember!
When you come down to some part of Nigeria,you would find out that African traditions are really strong especially when it has to do with issues such as this: Someone’s daughter,who was not given to you in marriage dying in your hands. If she dies whether you have children with her or not,you would be forced to traditionally marry her accordingly before she would be buried! No Jupiter would make you escape it!
Could this be what Mr.Musiliu Owolabi,a 36 year old man was running a way from when his girlfriend of 6 months died in his hotel room? Could this be the reason why he took his dead girlfriend to an uncompleted building,digs a shallow grave and buried her without any body’s knowledge?
I truly fear Mr. Owolabi’s mysterious action. This looks ritualistic! And there is nothing he could tell any reasonable mind that would justify this wicked and heartless act!
Mr. Owolabi has not revealed to us why on earth he would take the corpse of his girlfriend who died mysteriously after being in a hotel room and buried her corpse in one uncompleted building in the mid night but I put it to him that he was responsible for the death of his girlfriend.
He looked pure and gentle in the eyes when he said he never had s*x with his girlfriend since they started dating for 6 months. The trouble would have been lighter for Owolabi had he reported the unfortunate incidence to the hotel management and the police. But now,having taken the dead body of his girlfriend and buried it secretly shows there is more to the news than the eye can see!
“On interrogation, the suspect admitted taking the deceased to Rocky Gold Hotel at Iyana-Apakila, Abeokuta, for pleasure, where he claimed she fell ill and later took her in his vehicle, but died under a mysterious circumstance in the car. He further confessed that he took the corpse to a nearby bush, dug a shallow grave and buried it without disclosing same to anybody. This made the circumstances of her death mysterious as well as questionable, which is condemnable. The suspect will soon be arraigned before a court of competent jurisdiction” says police.
Do you in your wisdom think Mr. Owolabi has hand in the death of his girlfriend? Please tell us!!!
Tags: single & Married
Previous Post

American Police Shot A Man Dead,Thinking He Had A Gun When It Was Iphone