My ladies,see how a ritualist paid for his sins

Photo: A ritualist whose victim escaped 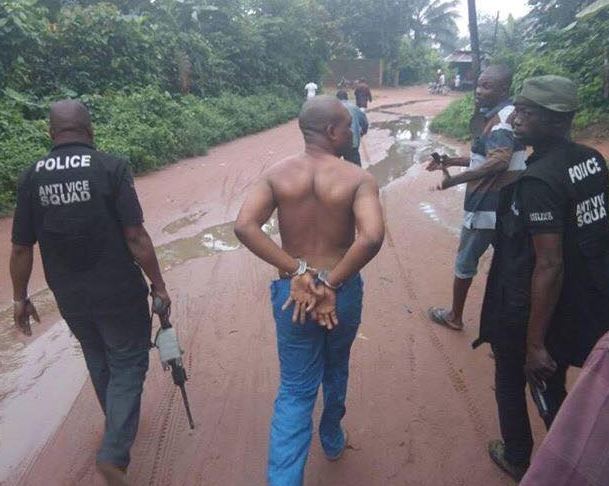 Ever wondered why some men would think of how to make money,and all their business plan would be ”get a human, preferably a fine lady or baby,kill her and your money comes”? Well this is exactly what some men do to make money and live big in society,and when you see them,you begin to feel they are yours.

The report has it that the ritualist captured a lady he wanted to use for ritual. The man stabbed the lady several times and finally,the lady was still able to escape to a nearby house where she got help. Youths of the community where she ran into in her body gushing with blood,mobilized themselves and searched for the man inside the bush where he was hiding. Finally after many hours,the boys got him,beat him up without any pity,and handed him to the police.My ladies,see how a ritualist paid for his sin.

A lot of people aren’t happy that the rituualist,whose name was not released to us was handed to the police. However,the joy,our joy is that the man did not succeed with his evil plans to use a woman to make his money. Our joy again is that our fellow woman escaped from the trap of a man. Our joy is that a woman has the power to come out of the lion’s mouth and exposed the evil perpetrator!

The saying that women are weaker vessels as far as men are concerned has made our women not to try to escape dangers from men. But women,always try and try your best possible before anything else! Don’t be weak in presence of men,fight harder to save your life and give your fellow women hope to survive! My ladies,see how a ritualist paid for his sins?

The honest truth is that,even if the police do not do their job to bring justice to what this evil man has done,at least,his wings would have been broken in pieces,and his power would have been destroyed. In his advice to his fellow evil perpetrators,he is sure to tell them never to play with the life of women in anyway. Yes,I am very sure that the man,that is the ritualist,would never come back to this world as a ritualist anymore!  He has been caught,and my ladies,you see how a ritualist paid for his sin???