”Women are the cause of domestic abuses”-
Commissioner for women affairs,Lagos 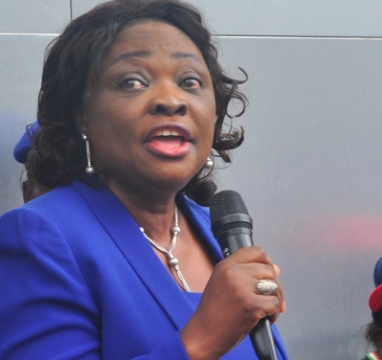 Did you hear that? That most women are the cause of domestic abuses,not their husbands says the commissioner for women affairs,Lagos at a programme on Management of Domestic Violence, organized by the ministry in Lagos . What is she talking about? What does Lola Akande mean by this statement? The beatings,slapping,blowing? and other injurious abuses inflicted by some wicked husbands at home are now being attributed to the women? How do women cause their own pains by themselves? The commissioner for women affairs must explain to us!

”Negligence, sophistication, misguided utterances, infidelity, use of abusive words and gullibility on the part of the women, are some of the actions women display that induce domestic violence.” Is that all? ”Most women are the cause domestic abuses,not their husbands” -Commissioner for women affairs?

“It is no longer news that many women have lost their lives through domestic violence. The more we try to put the blame on the men folk, the more we will continue to turn blind eyes to the fact that many women are the cause of the domestic violence we see today. This is because we fail to understand some important aspects of how most men are wired. Some women also cause violence by using abusive words and misguided utterances that can provoke the men. But let me also state that a man who beats a woman is a beast, and does not deserve to live with humans. No matter how provoked you may be as a man, please, never raise your hand to beat your wife, ” the commissioner for women affairs,Lagos,said.

Now you are talking the Honorable commissioner for women affairs. ”Any man who beats his wife is a beast and does not deserve to live with human!” That is it! I am sure before any woman talks harsh on her husband,her husband would have triggered it. No fire burns without a spark you know?However,no amount of negligence should make a man to hit his wife,rather,let it be negligence for negligence! Even misguided speech. If a man finds out that his wife is so angry and she begins to talk offensively,he could excuse himself and take his leave,until the atmosphere comes down! That is what real men do,and not to hit their wives because of misguided speech.

”Most women are the cause of domestic abuses,not their husbands”-Commissioner of women affairs. How? ”Because of infidelity” she says. This is true madam. You are right! Why should a woman disgust herself and shame her husband who owns her body in both public and in private and go without a flog or beating? Any woman who cannot close her legs and wait for her husband should be treated by her husband anyhow he likes. She asks for it!

Women,have deep respect for your husbands,if you want them to love you says the good book the Bible.On the other hand,do not allow your husbands to abuse you if you have tried your best possible to respect him. Act,to save your life!!!

Sad! The only surviving member of his father’s family dies,and was buried with a coffin made from abandoned plank constructed by Boys’ Brigade,after his family abandoned his corpse

”We Are In This For Better And For Worse,In Sickness And In Health…”-Osasu Igbinedion

''We Are In This For Better And For Worse,In Sickness And In Health...''-Osasu Igbinedion