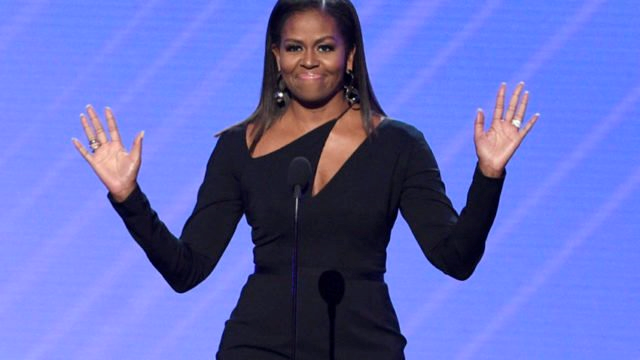 “Any woman who voted against Hillary Clinton voted against their own voice,”. This was Michelle Obama’s voice at a marketing conference in Boston speaking to women. To her,she believes that the voice of every woman during the American election of Donald Trump and Hilary Clinton was telling

them to vote Hilary. Why? Was it because,Hilary was a woman,or because she has greater and better qualities than Donald Trump?

“It doesn’t say much about Hillary, and everybody’s trying to worry about what it means for Hillary and no, no, no what does this mean for us as women?” she asked. So it’s actually because,Hilary Clinton is a woman. Michelle actually slams American Women for not voting Hilary not because she was more qualified than Trump,but because she is a woman.  Michelle’s argument wasn’t on feminism as giving women who have merited certain positions the same opportunity as men would have,but ”at least you all should have voted Hilary Clinton no matter what just to see that a woman is in that position and rules American government.
“That we look at those two candidates, as women, and many of us said, ‘He’s better for me. His voice is more true to me.’ To me that just says, you don’t like your voice. You just like the thing you’re told to like.” Mrs. Obama said.
I think my lady is getting it wrong this time. She is also being too judgemental about everything as well. If Michelle were beside every American woman on the election minute casting their votes,surely,she would have forced them all to vote Hilary,even when the choice to do so might be against their will! How is Michelle so sure that the voice of every American woman tells them to vote Hilary and not Trump? Is Michelle Obama now a heart reader? Knowing what the voice of someone says???
Tags: Uncategorized
Previous Post

“I’m going straight to that Villa. I’m the next president.” Ekiti state governor,Ayo Fayose finally declares his interest to be the next Nigerian president,2019

“Football is a love language spoken worldwide”. Arsenal fan meets a legendary arsenal player and it feels like his blood

"Football is a love language spoken worldwide''. Arsenal fan meets a legendary arsenal player and it feels like his blood