by JoJo
in Hot Topics
0 0
0
0
SHARES
0
VIEWS
Share on FacebookShare on Twitter
Oby Ezekwesili.
Are you so surprised that the former education minister Oby Ezekwesili sounds this romantic? Everyone knows her as one academic giant,and a busy career oriented person who is very good about what the book says!
Oby Ezekwesili is now advising young husbands to show romantic love to their wives,no,she called them babes rather (sounding such romantic right?) rather than being like the generation of their dads.
Well,I know a lot of people wouldn’t understand what Oby Ezekwesili meant by ”your dads’ generation”. If you were born in Africa,Nigeria precisely were Oby Ezekwesili came from,you would understand. Men in that region are not just romantic,it looks as if it is a taboo to call their wives romantic names like ”sweety,honey,my love ”and all of that. The expression: ”I love you”seems to be a bomb shell in the heart of African men,that they find so hard to release from their lips.
Men,do not be like your dads’ generation says the former education minister Oby Ezekwesili! Here she  still has more for you: 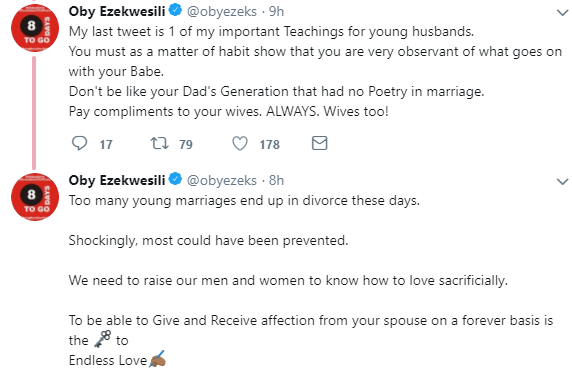 Yea,that’s true. To Give and Receive affection from your spouse on a forever basis is the key to endless love!
So in other words,”I love you” and other romantic expressions shouldn’t be used by spouses for their mates once or occasionally. It should be a forever thing! Hope you got it,hard man!
But come to think of it: Why would certain men not use love expressions for their wives? How did they even fall in love and get married in the first place? No,this is not a question for the gods! It is a question for you!
But to be very sincere,”I love you is a statement not often said by majority of spouses even when they are really into love with their mates. They love to say it in their hearts not in their lips. They love to sing and hear it inside,and not outside! Such are my beautiful people and I am sure they love it that way. They are not complaining!
But men,generation is going and generation is coming! Don’t be like your dads’ generation,no. Be like your own generation,be carried along!
Yes,we know that you are not used to those romantic expressions,but they could be very important ingredients to spicy up your love in your marriage! I love you! And you can say that to your wifeyyyyy!!!!
Tags: single & Married
Previous Post

This Is A Shame! Herdsmen Proving Stronger Than Nigerian Government?

”I am Open To Love And I Pray For Life Partner” -Actress Eucharia Anuobi See Full details!

''I am Open To Love And I Pray For Life Partner'' -Actress Eucharia Anuobi See Full details!