Lesbians crying to have children?

Photo: Same s*x couple adopted a son,and ordered to return
him to the biological father. 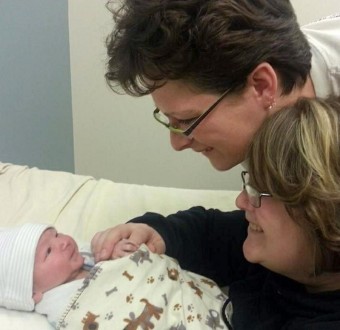 You know there are people on earth who do not wish to have children. All they want in life is to be with someone,a soulmate,whom their hearts go for. This kind of practice is commonly seen among the white people who believe that all they need is just ”two of us”,although some of them.

When the issue of same s*x marriage began to gain popularity,one like me would think that same s*x people are not interested in marriage to have children otherwise,a man wouldn’t ever think of getting married to his fellow man,nor will a woman think of doing the same.

Again,the same s*x couple who obeyed the order to return their adopted son to the biological father was rewarded with some pretty cash: $3.25m (£2.53m). Can you imagine that? What will they do with that kind of huge money? Get a man to impregnate a woman to have children for them and then pay them off? Go again for another child adoption? So lesbians crying to have children?

Please recall that it was a son that the lesbians adopted. This is strange! Why would lesbians who have no regard for opposite s*x go for a male child adoption when they should have gone for a female? Something is beginning to change here in the world of lesbian! They are always confused,not getting things right like they should most times.

Since same s*x couple yearn to have children,it then now means that they have proven their choice of lesbianism very wrong,erronic and shameful,as that arrangement cannot bring anything good to them. At least they could see that it is not a perfect arrangement that can result in giving joy and satisfaction!!!

A pastor impregnates a naked house wife and you blamed him?