Photo: My husband was totally innocent. He didn’t rape our
granddaughter,she suddenly realizes 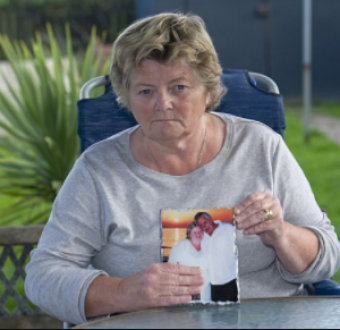 You recall the true life story of a granddaughter who accused her grandfather of raping her right? You also remember that the man committed suicide during his trial in court hmm? Very well! Now,we are also sure that there are some analytical minds as ours who ever since hearing the story would be wondering what role the man’s wife played at the critical time and period in her husband’s life,yea? Very good too.

When the man was said to be accused by his own granddaughter that he raped her,it was actually the responsibility of his wife to testify to court that he never did. She could have been in the fore front,fighting this,giving evidence with every fact she has that her husband didn’t rape his granddaughter! But all the while,she was watching the drama as it folds,to see how it would end as much as we care.

Yes,the grandad whose evidence was not enough to convince anyone including his own wedded wife committed suicide,killed himself and died! Now his wife has realized that her husband didn’t rape his granddaughter,who also is her granddaughter,only when her granddaughter had confessed in her letter, to her grandmother,asking her to forgive her,that she lied.

The issue now is not that her granddaughter accused her grandfather of a serious sin and abuse such as rape,but the fact that a wife,did not trust her husband enough! Now she is a widow,has she not killed her marriage and cheaply destroyed it? Can we say that their granddaughter did? No,the girl didn’t! All she did was that she laid accusation on her grandfather!

In times of troubles like this,couples should learn to be with each other very closely,giving their support. Don’t you think that if the woman had always been by the side of her husband,giving him emotional support and assurance of trust,the man would have lived to see the day when their granddaughter would confessed???

Love and jealousy that result to murder –

Racism is indeed foolishness! See what people who practice racism look like…

Racism is indeed foolishness! See what people who practice racism look like...