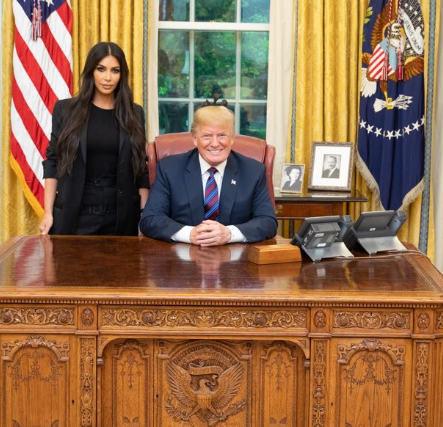 The reality TV star Kim Kardashian had meeting with the US president Donald Trump this morning.
The television host discussed how a grand mother of 63 years who was sentenced to life in prison would receive prerogative of mercy from President Trump.
According to the report,Alice Marie Johnson,whom Kim has been fighting for has been behind bars for more than two decades now over drug offence. See report below:
”Johnson was sentenced to life in prison without parole in 1996 for a first-time, non-violent drug offence. She was convicted of being a “telephone mule”, relaying messages between drug distributors and sellers.
Johnson has been a model inmate who is active in many programmes, including work in the prison hospice. She fitted all of the criteria for former President Barack Obama’s Clemency Project 2014, but was denied just days before the end of his term.”
More report has it that Kim Kardashian first got involved in the case when her eyes saw the video about her case in social media. Kim has the feelings of unfair treatment for Ms.Johnson.
”

2017”
Ever since seeing this unfair treatment to Johnson,Kim has been making effort to see that Johnson as well as others in similar cases are given a second chance to live outside prison. Thus meeting president Trump.
After meeting US president,below was Kim’s expression:

I would like to thank President Trump for his time this afternoon. It is our hope that the President will grant clemency to Ms. Alice Marie Johnson who is serving a life sentence for a first-time, non-violent drug offense.
— Kim Kardashian West (@KimKardashian) May 31, 2018

We are optimistic about Ms. Johnson’s future and hopeful that she —and so many like her—will get a second chance at life.
— Kim Kardashian West (@KimKardashian) May 31, 2018

And from Donald Trump,this was his take: 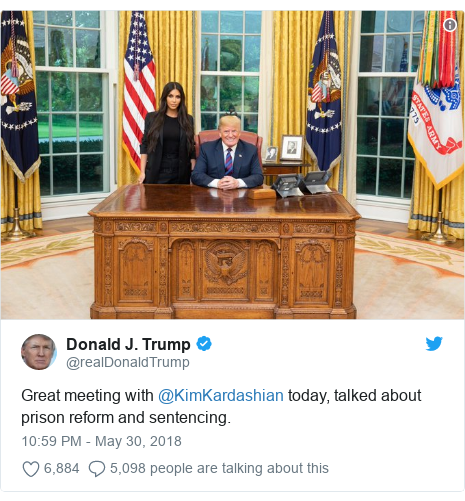 World No.1 Tennis Star Serena Williams Now Into Fashion Career. Has This Motivational Message For Fans.

Why Do Good People Die Like This? Look At Chairman Of Punch Newspaper!

Why Do Good People Die Like This? Look At Chairman Of Punch Newspaper!