Kenneth Okonkwo Reveals Why He Is In Politics,His Aim And About His Acting Career. Read Here! 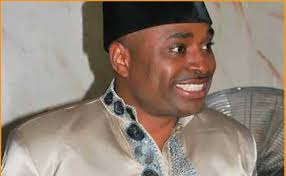 Kenneth Okonkwo,a Nigerian popular actor who has been in Nollywood industry for over twenty years now has lately become a big time politician.

He is most popularly known as Andy Okeke in the movie: ”Living In Bondage” in which he was the major character 26 years ago.
The veteran actor for over two decades now has now been strongly aspired to become the next Enugu state governor come 2019 .
In his interview with Adeniyi Adewoyin,the actor-cum politician is very optimistic that he is going to win Enugu governorship election come 2019.
When asked however,if he is giving up his acting career for politics,he said he is not sure because acting is already part of him.
Keneneth Okonkwo tells us why he wants to be a politician:
”That is because we are in democracy and democracy should be for everybody. Everybody might not be in power at the same time but everybody should be in politics because you should decide what should influence your life. The leadership of any nation influences the life of everybody and so everybody should be in politics. However, I have been politically active throughout my life. From my university days, I was the Secretary General for the Society for the Advancement of Business Management. When I was at the University of Lagos doing my masters, I was the president of the Society of International Law and Diplomacy. So I have always been in politics and like I said earlier, I do the things that I am passionate about and that’s why I come out with determination.”
When he was asked if he has any fear that he is going to fail in 2019 governorship election as other actors who ventured into politics had failed,this was what Kenneth Okonkwo said:
”I have no fear. The slogan is: ‘When Jesus says yes, no man can say No.’ I am going to win by the grace of God if everything is down the way it is supposed to be and I know it will. You may just be talking to the next governor of Enugu State. I have no fear.”
Is actor Kenneth Okonkwo finally leaving Nollywood? He tells us:
”Thank God acting is a job. One politician in Enugu State said one of his conditions for supporting me is that I must continue acting because he is my fan and the beauty of acting is that it does not have any retirement age. So I am an actor. I cannot say I will never leave it because ‘Never belongs to God.’ So it depends on the will of God but just know that I am an actor for life.”
Tags: News
Previous Post

The Only Relationship Where You Will Never Have Your Heart Broken!