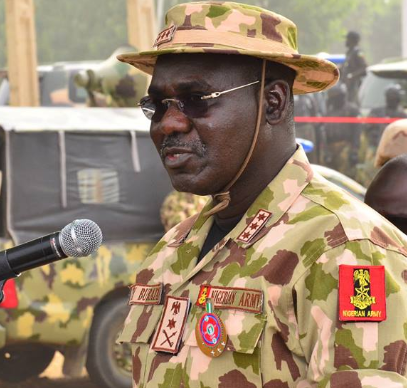 The saying ””It was only a pronuncement,it wasn’t a declaration per se that IPOB is a terrorist organization” was made during the official launch of Operation Python Dance II in Abakaliki

On Friday,the 15th day of September 2017,the Director Defence Information, Major General John Enenche, released a statement in which he says :”From the foregoing, the Armed Forces of Nigeria wishes to confirm to the general public that IPOB from all intent, plan and purpose as analysed, is a militant terrorist organisation. Therefore, parents and particularly unsuspecting residents of the South East and other Nigerians should advice their wards to desist from joining the group. The Defence Headquarters restates its commitment to handling all the security challenges in the Country and further assures all Nigerians of the protection of lives and property”.
Now what does the Chief of Army staff mean in his recent statement,that the Nigerian Army didn’t declare the IPOB a terrorist group?
“You have to get it very clear. First of all, what the Defence Headquarters did was to make pronouncement. It wasn’t a declaration per se. But this has given room for the right step to be taken. I think the government is doing the right thing” the Chief of Army Staff, Lt. General Tukur Buratai says.
Okay oo,we are watching,and Big brothers are watching too!!!
Tags: News-hit
Previous Post

ASUU suspends strike, soon to embark on another.