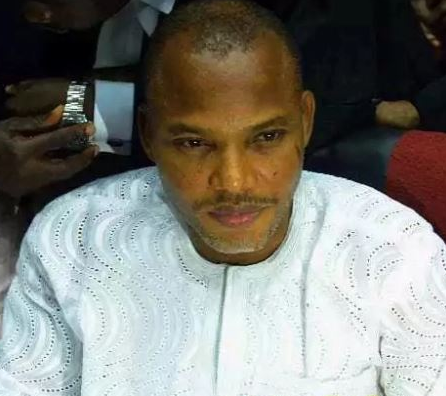 Following the allegation of the younger brother of Nnamdi Kanu, Who alleged the military of kidnapping the secessionist leader of IPOB,on the 10th day of September 2017,Emmanuel still insists that the last time his elder brother was seen was the day the army invaded their home,thus,

Where is Prince Nnamdi Kanu? Is he actually in the custody of the military? Here is what the Army spokesperson has to say:
“It is not the responsibility of DHQ to declare Nnamdi Kanu wanted. Nnamdi Kanu is not in the custody of the military. Nobody raided Kanu’s home and I stand to be justified not from the information I got. I was watching it live, was monitoring it live, speaking with them on the ground. I think I later confirmed that there was nothing to actually justify the legality of IPOB members mounting roadblocks. I saw the militancy, nobody told me and I saw the actions there. We are still investigating.” He continued:
”The military did not proscribe IPOB. Due process was followed to proscribe them. The job of the military was to diagnose security issues and warned the public of consequences and that is part of our media operations. We did our operations very well otherwise that weekend would have been the longest weekend in this country and we are also very careful in choosing our words and we know the law very well.”
Reacting to the statement of the Army spokesperson in the expressions above,the counsel of the IPOB leader, Ifeanyi Ejioffor, insisted that their leader is with the military,saying:
“We are not moved by the press statement. The military doesn’t need to issue press statement, it is better to come to court and say so. Let them come and tell Nigerians where they kept Kanu. They are the ones that raided his house. Nigerians know the truth,”
Hmm,biko nu,where is Nnamdi Kanu???
Tags: News-hit
Previous Post

It is unreasonable that the South African secondary school students caught in serious relationship were suspended from school!

”IPOB is not recognized as a terrorist group under UK law” says UK High Commission,demands the where about of her citizen Nnamdi Kanu from FG.

''IPOB is not recognized as a terrorist group under UK law'' says UK High Commission,demands the where about of her citizen Nnamdi Kanu from FG.