by JoJo
in Hot Topics
0 0
0
0
SHARES
0
VIEWS
Share on FacebookShare on Twitter
”Fayose is guilty of anti-party activities.”- Sanator Buruji 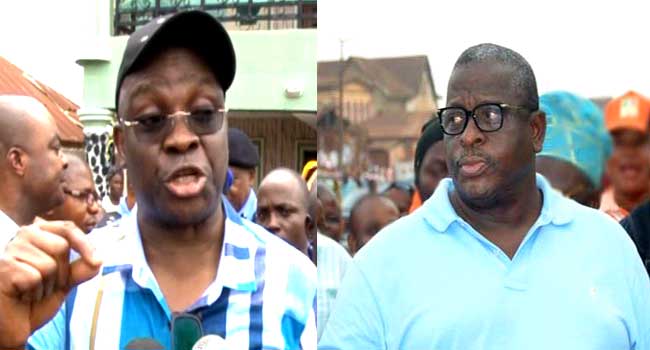 After declaring his intention for the post of presidency,come 2019,governor Ayo Fayose no doubt have received a lot of insult,mockery and laughter from both friends and

Following the annuncement of Fayose to be a PDP presidential candidate for 2019 presidential election,some friends and brothers of the same party are not in any way in support of Fayose. Senator Buruji who represents Ogun East Senatorial district in the Senate and a member of PDP, taunts Fayose saying that the anti-depressants that the governor takes can no longer contain him. Below are the reasons for mocking governor Fayose:
“Fayose seeks to further widen the ethnic divide in our country, cause resentment against our great party and tragically bring the party into disrepute.
Although his so-called declaration is of no political consequence whatsoever, it is antithetical to the mood of the party and nation that someone who claims to be a party man could go against the decision of the party to zone the presidency to the north.
By 2019, the south would have had the presidency for 14 of Nigeria’s 20 years democratic rule since 1999, with a southerner ruling for two terms back to back. It smacks of insensitivity and greed for anyone from the south to declare for the presidency so soon. With Fayose’s latest action, it is now glaring that all his grandstanding was meant to further his own selfish interest. He never had the interest of the party, the people and the nation at heart. This man is simply desperate for power. It is like since his anti-depressant drugs can no longer contain him, he is looking for every available means to perpetuate himself in office. Otherwise, how do we explain the fact that the chairman of the PDP governors’ forum would go against the decision of the party? Little wonder none of his governor-colleagues attended the event.
No member of the party in the national assembly attended the ceremony. At first, he said he wanted to seek re-election to continue his first term which was truncated by impeachment in 2006. Thereafter, he began to work towards becoming the vice-president and now he says he wants to be the president!
I am however glad that Nigerians are no fools. They know those who really have their interest at heart. They know the leaders with the demonstrable capacity to take Nigeria to the proverbial promised land; not the charlatans and looters who pretend to be leaders. On seeing his so-called presidential declaration on television, I wondered if he was declaring to be a regional president because most of those who attended were from a region of the country. He is guilty of anti-party activities.
In the light of the above, I wish to urge the senator Ahmed Makarfi-led NCC to issue a query to Fayose and subsequently refer him to the national disciplinary committee for going against the party’s zoning arrangement and stoking resentment against our party in the minds of the electorate.”
Hmm,will governor Ayo Fayose give up his presidential aspiration for these reasons? We are watching…
Tags: News-hit
Previous Post

”IPOB is not a terrorist organization under U.S. law” the Americans told Nigerian Minister of Information and Culture

It would surprise you how marriage expert Chris Attoh is. A divorcee,but he has a wonderful marriage advice for you

It would surprise you how marriage expert Chris Attoh is. A divorcee,but he has a wonderful marriage advice for you