Burglar apprehended after trying to run away with Plasma TV, other instruments stolen from a church in Delta (photos) 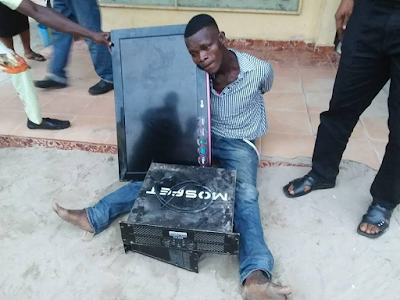 Can you imagine a situation where someone who is a thief,yes,steals all he could at a time that he finally decides that okay,fine,what I should do next is to go into a church and steal  their plasma TV  and other church instrument? Well,this is the case of the young man,whose picture you can see above! Since his birth,all he knows is how to pick pocket,smuggle things and steal from others. While some have attributed this behavior to a spiritual problem,others simply vent it to a genetic problem. What do you think? Is stealing a genetic problem?

IS STEALING A GENETIC PROBLEM?

The truth is that 99% of illiterates or unlettered, so believe that stealing could be inherited. For example,if a child begins to steal from his childhood to his adult age,he may not come out of it in his entire life time. This is because,it is believed that he has inherited stealing from birth. His mother steals and and she is known all over the community as a thief. Now her son has become a thief,a well known one as that,everyone now concludes  that his stealing is a genetic problem. Is this true?

Well,the truth is that stealing  is not,and can never be a genetic problem. The saying that ones mother or father is a thief and that for this reason,their children will also be thieves in not a true saying. Whatever one is or chooses to be is a choice he has made,and not what he has inherited from his parent! For example,we have seen a number of persons who came from one ugly background or the other and still made a huge difference in their life style. This proves that really,fruits are not known by their roots. Yes,have you ever seen a root and identify which fruits it is,or it can bear?

Every wrong that has to be done right must be done with determination. Nothing good comes easy after all!! It is all about knowing whether certain things are good to reckon with or not. If someone gives you poison to drink instead of water and you know it,will you still drink it? No reasonable or sensible one will,,even if it is being forced on you. With your last strength,you will fight yourself off it, and escape! The same thing is any bad trait in your family. If you reject or despise that trait,your determination can set you apart,after all,fruits are not known by their roots!!! Is stealing a genetic problem???