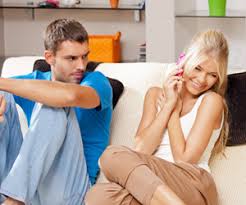 Have you ever met a girl or do you know of any girl who has ever said ”I don’t even know if he loves me as much as I do”?
Now you begin to ask why someone would said she has a boyfriend and she doesn’t even know if he love her or not.
This happens,but yes,most times in a relationship where a boyfriend  doesn’t really show he cares about who calls his girl,whom she goes out to meet or whether she has another boyfriend besides him or not!
This is a relationship free of jealousy.
On the contrary,there are some boyfriends that cannot rest unless they see prove of their doubt. If his girlfriend says she is going out to visit her girlfriend,he won’t believe her until she reaches there and he calls and hear the voice of the girl his girlfriend says she is going to visit. What is this?
A jealous boyfriend!
What is wrong with  a jealous boyfriend? Is anything wrong with jealous boyfriend?
Well,in as much as there is much element of nagging and complaints in a jealous relationship,at least,the girl doesn’t have to ask or wonder whether her boyfriend loves her or not.
He doesn’t want to lose her to any man neither would he like to take chances and someone snatches
his girlfriend from him. Yes,that is why he is jealous!

Click here to read more: Is It True That Once A Cheat Is Always A Cheat?