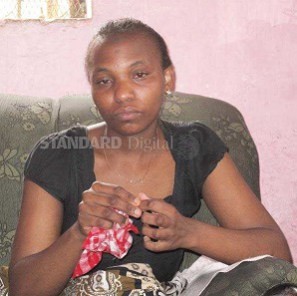 When I heard about the news,I quickly sort for it and read it to know whether it is true or not. Surprisingly,I found out from the context that it was as true as the caption said.
A 27 year old lady was raped and instead of fighting for justice for her,she was imprisoned because,rape and being raped are against the law of the land of Saudi Arabia.
But honestly,what does the law of Saudi Arabia expect of a helpless lady who finds herself in a helpless situation where she couldn’t fight and succeed the rapist? Kill herself? Keep it and die with it?
Please read the story as well:
”A 27-year-old Kenyan woman has returned home after a one-year ordeal in a Saudi Arabian prison.
Levina Mapenzi Ngolo, who was jailed for allegedly engaging in illicit sex, returned home from Riyadh last Thursday night aboard an Ethiopian airliner.
In her arms was a two-year-old boy she says she conceived as a result of the rape.
Ngolo, who worked as a house help, said she was raped by an Indian migrant.
They were employed by the same person and stayed in the same flat. She said the man threatened her with a knife.
However, Ms Ngolo was charged, under Saudi Arabia’s law, with engaging in sex outside marriage and jailed. Her attacker is still serving his three-year jail term.
Ngolo said her legs were chained all the time she was in prison. She gave birth to her son in prison after a seven-month court battle.
She said she was handed back her passport at the airport, shortly before boarding the plane back to Kenya.
Ngolo, who spoke at her parents’ home in Frere Town in Mombasa, claimed her Indian attacker, a driver, raped her overnight in 2016.
“The driver took advantage of the absence of our employer to attack me. Our employer had gone to visit her children. He accosted me as I came out of the house,” said Ngolo.
While in prison, Ngolo said, inmates were often beaten but she was spared because of her pregnancy.
Ngolo’s sister, Esther Kaidza, said a Kenyan woman called in September 2016 to inform her that her sibling had been arrested.
“A woman who was speaking Arabic was the first one to call me but we were unable to communicate because of language barrier. Later, the Kenyan called me. She said Lavina was in custody for sleeping with a driver and becoming pregnant, contrary to the laws of that land,” Kaidza said.
Ngolo said she could not immediately report the incident to her employer for fear of the consequences.
But after some time, she started feeling sick. That is when her employer took her to hospital. She tested positive for pregnancy.
“It was my employer’s son who first expressed suspicions that I could be pregnant. After the truth came out, his mother suggested that I be quietly returned to Kenya. However, her son took me to a police station, where I was immediately arrested,” said Ngolo.
Her attacker was beaten up and taken to the police station. They were both charged with engaging in illicit sex.
Ngolo was sentenced to one year in jail because she did not consent to sex while the driver was jailed for three years. She said she was not allowed to attend clinic until she gave birth.
Her father, Ngolo Baya, 75, said he was happy to welcome his daughter and her baby back home.
“The entire family was shocked when we learnt of her arrest in a foreign country,” Baya said.”
Source: Standard Digital.
Obviously,Ngolo was raped by her employer’s driver because:
One,she was simply peaceful and afraid of threat. In fact she gave in to the man and the man did to her body,according to his desire.
Again,the man who raped Ngolo could do so because he had studied her and known her weaknesses. She could fear and tremble,she could also cooperate with any body to make peace be even at her own risk and expense.
Ngolo had every right and reason to defend herself and prevent being raped because the driver has no extra right to have such power over Ngolo in that house. They are both employed to serve one master!
Yes,Ngolo failed stupidly,but is this the reason why she was imprisoned for being raped in Saudi Arabia???
Tags: News
Previous Post