“If Nigeria is indeed out of economic recession, has price of foodstuffs like rice reduced to N7, 000 per bag?”- Gov.Ayo Fayose asks the Federal government

Governor Fayose speaks on why Nigeria economy is not out of recession
as claimed by the federal government. 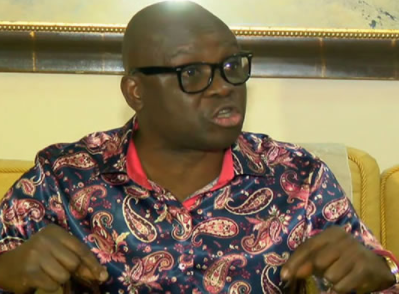 Yes I ask: Is Nigeria really out of recession? Since I heard the news on the 5th of September 2017,as released by the Nigeria Bureau of Statistics,it never meant anything to me. I never felt or agreed that Nigeria government is out of economic recession as they implied. So is the governor of Ekiti state,Ayo Fayose. What are the reasons why Governor Ayo Fayose feels that Nigeria is not out of recession? Here he speaks though his Special Assistant on Public Communications and New Media, Lere Olayinka:

“The reality is that Nigerians are suffering and dying, with foods and drugs out of their reach and no among of economic statistics will make meaning to people who cannot afford to eat once daily. Claiming that Nigeria is out of economic recession without any corresponding effect on the living condition of the people is just like they said Boko Haram had been defeated and over 400 people were killed by the insurgents in the last five months.

“If Nigeria is indeed out of economic recession, has price of foodstuffs like rice reduced to N7, 000 per bag that it was when Buhari took over power? Is dollar now N197 to $1? Is petrol now back to N87 per litre that Buhari met it in May 2015? Are Nigerians now feeding comfortably, even if it is once in a day? Most importantly, are States now getting enough allocation from the federation account to be able to meet their obligations, especially payment of salary?” ( Nice points Sir)

Speaking further on the issue of Nigeria being out of recession, the governor said the claim was nothing but another attempt by the President Buhari-led APC government to deceive Nigerians ahead of the 2019 elections.

“It must be stated that Nigeria’s foreign reserves, which stood at $28.6 billion by May 2015 that President Buhari took over power declined steadily to $23.89 billion by the last quarter of 2016. It was in 2016 that Nigeria slipped into recession, owing to the bad economic policies and repressive actions of President Buhari. It is sad that the APC government has remained on the path of lies and propaganda and I wonder why the government can’t be truthful for once. However, if this latest lie is about 2019 general elections, they have missed it because Nigerians can no longer be received by the APC lying government. Nigerians should therefore disregard their lies and keep praying for God intervention in the affairs of the country,”.

I love the questions raised by the governor of Ekiti state especially the question“If Nigeria is indeed out of economic recession, has price of foodstuffs like rice reduced to N7, 000 per bag that it was when Buhari took over power?” In fact,Nigeria citizens are the only people who should tell whether the economy is out of recession as claimed by the federal government or not! They are the only ones who feel the heat and the cold of the effects of recession and are therefore in better position to tell if Nigeria is truly out of recession,or is still in recession!!!

People with disabilities in Kebbi state to be appointed special advisers,in government. See why:

Ladies,can you declare your participation in search for a husband,giving your requirement?

Ladies,can you declare your participation in search for a husband,giving your requirement?