by JoJo
in Hot Topics
0 0
0
0
SHARES
1
VIEWS
Share on FacebookShare on Twitter
She had an eight-hour operation within the first two weeks of her life. 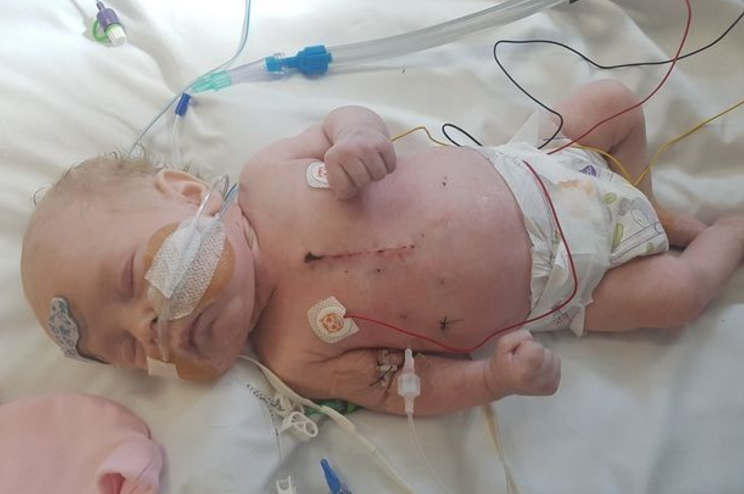 When the good book says that children are precious gifts from God,you won’t understand! Ordinarily,when someone,has heart failure,kidney problems,or problems of other body organs,he likely dies. But here is a child,a bay girl who was discovered in her mother’s womb with

problems of a half heart . Her name is baby Lacey-Janet. She had a rare condition where the left lower pumping chamber of the heart does not develop properly.

At discovering this problem,the pregnant mother  was many times advised by doctors to abort the baby,for fear that both the mother and the baby might not survive death. Th pregnant mother refused. Her heart was so strong to continue carrying her baby.
As the devil may prove the doctors right sometimes,almost immediately after the baby was born, she stopped breathing in her mother’s arms and had an eight-hour operation within the first two weeks of her life. Fortunately,as God would have it,saying yes to those who believe in his goodness,the baby,baby Lacey- Janet, pulled through and according to her doctor,she will now be able to lead as normal a life as possible.
“It amazes me how she even made it through the pregnancy. When we were told about the problems with Lacey-Janet’s heart we were told to abort but for me it was all a big dream. They kept saying that she wasn’t going to live long but we were never going to abort her.” Lisa,the mother says. she continues: “She will need heart care for the rest of her life. But after seeing what she has already been through as a tiny baby I am confident she is only going to get stronger.”
Yes,as long as God is the giver of life and sustainer of it,our baby girl,the miracle baby Lacey-Janet,will continue to live her life as long as possible!!!
Tags: Child Birthchild development
Previous Post

Where is Nnamdi Kanu? The Human rights lawyer, Femi Falana reveals his mind

Where is Nnamdi Kanu? The Human rights lawyer, Femi Falana reveals his mind