”He did this to a guy who gave him #1,000 only for the man to walk away from him and feel his Manhood disappear” Says an eye witness of a begging stuation

by JoJo
in Hot Topics
0 0
0
0
SHARES
0
VIEWS
Share on FacebookShare on Twitter
Photo: man’s penis disappeared after giving alms to a beggar. 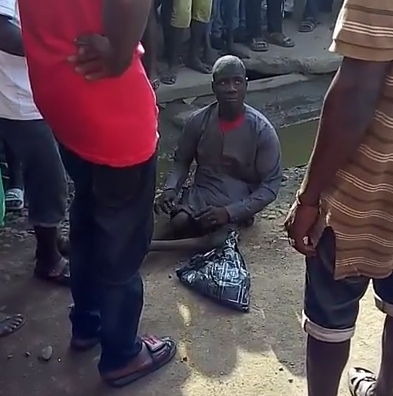 This absolutely reminds me of a news on NTA news-line in early 2000,where a couple were going down to Ikeja from Victoria Island. Getting to a aplace where they were held up on a traffic,some beggars rushed out and began begging  people on the route. Getting to the couple in question,the wife

brought out just #20 from her bag and gave to the beggar,a man. Getting to a very short distance,her eyes began to blink and she began saying to her husband: Honey,my eyes,I can’t see very well”. And before she knew it,she was totally blind. Suspecting that all of this started just a few seconds ago,just after giving a beggar some money,the husband quickly reversed to where the beggar was and fortunately,the beggar was still there. The husband of the woman who got blind held the beggar and raised alarm,and people gathered. After narrating their ordeal,the beggar was seriously beaten and threatened to be burnt in fire and fuel. So he opened up and said: Yes,I made her blind but she can see again only if she can hold me and kiss me”. You can imagine that! That being the only option  for the woman to get back her sight,she went closer to the beggar to do as he said. Just at the moment the beggar held the woman and kissed her,both of them disappeared. Thus,making the husband of the woman to report the news to NTA.

How wicked most of these beggars on the street could be!  The truth is that since begging cannot be justified by any circumstance of whatsoever,people should learn not to give alms to any beggar on the street,car parks,along the road or wheresoever. They won’t die if you don’t give them any alms!
We have had thousands of negative reports such as this in just few months about beggars making kind hearted people go useless in life after receiving alms. And what do we have here now? A beggar who is crippled,taking the manhood of a young man who gave him #1000 at Ikeja Along. Here is the report from an eye witness who shares the story on her IG.page:
”This happened at Ikeja Along bus stop on Friday at about 4pm…He’s a beggar who happens to be crippled but is known to take something in exchange from men who give him money….their manhood…He did this to a guy who gave him 1k only for to walk away from him and feel his Manhood disappear…I couldn’t video the victim for privacy reasons but here’s a video of the begger in question… This is a wake up to all of us…let’s be careful about who give alms to”
Handicapped,maimed, and people who are totally out of hand are made to proceed to a rehabilitation center in their state. Rehabilitation centers are shelters for these kinds of people where their needs are taken care of to have a society free of menace,and nuisances. People should also help to discourage begging in society by not giving any alms to them. To before warn is to before harm!!!
Tags: AbuseNews
Previous Post

”She sent me her naked pictures and my ex in bed with her and you say I should have done what? Asks the singer,Muma Gee