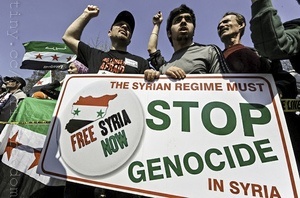 Imagine seeing this picture about 470000 times more and about 5000000 people injured. It is real,and every day,more reports of genocide and injurious are being reported in Syria as a result of war between them and Russia.

The most painful and annoying part of the story is that this is a war that began initially as protest by Syria citizens who were feeling some measures of marginalization from their government. The children of these protesting citizens were then caught, tortured, and killed.
To the wicked soldiers in Syria and Russia, I asked, what have these innocent children done to deserve pains and death from you? If their parents have wronged your government, why should their children pay the consequences?
Since you know that the worst crime in humanity is murder, especially against innocent people and children,and still committed it,you sure know that their blood are on your heads,and you will definitely pay for it.
Genocide has rendered millions of people useless, and hopeless! It is the highest form of evil and enmity in the world history. Nothing is ever gained by anyone. Everyone loses both the killers and the killed,the victor and the vanquished! Genocide is all injurious abuse!!!
Tags: AbuseAdvice TipsEducation
Previous Post