Do You Have What It Takes To Marry A Woman Older Than You Are? Find Out Here! 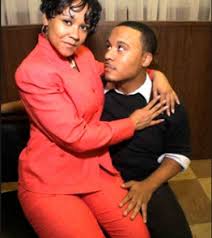 While we do not want to refer to a woman who is older than her husband or boyfriend as sugar mummy as others may put it,we realize that both of them have something in common. Most times,they are both more influential,richer and bigger than their husbands or boyfriends!
In the beginning,it was never in place for a man to marry a woman older than he is for any reason. But gone are those days.
Today,younger men could be comfortable getting married to women quite older than they are and they still have their places as ”heads”of their families.
Is this type of marriage relationship for every man? No! Below are the kinds of men who should or may marry women older than they:
Radical men. There are actually men who know how to take the bull by the horn. No matter the circumstance that presents itself,they must thrive and keep their heads high. These are the kinds of men that could marry women older than they are.
Are you kind of phlegmatic in nature? According to one research,men who do not take too seriously any issue or matter in life are better off to marry women who are older than they are.
Why phlegmatic or radical kind of men are best fitted for women older than they are is that older women whether you believe it or not would always remind you that they are older that you are,and thus expect you treat them with respect.
Can’t you see? A woman is now expecting one thing that is made for men,”respect”. This is why it takes a man who knows his right as a man to keep a woman in her rightful position. A radical man!
On the other hand,a kind of phlegmatic man who does not really care what respect is,who doesn’t bother whether he receives his due or not could do well with older women!
So,do you have what it takes to marry a woman older than you are? If you marry an older woman or a sugar mother,can you order her to sit down? Not to move an inch? Can a woman older than you are take approval of you before she does certain things?
If your answers to these questions are convincing YES,then you have what it takes to marry a woman older than you are!!!

Click to read more: Are Women Really Equal to Men? Find Out

Davido Signs A New Cooking Show Contract For His Chef Girlfriend Chioma. See The Worth…