Did Nigerian army REALLY attack Nnamdi Kanu in his home? The IPOB leader,finally reveals the truth!! 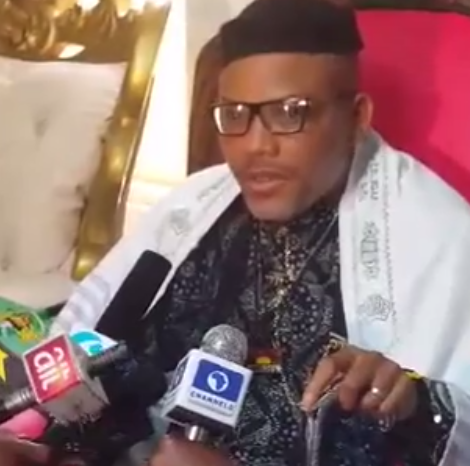 “The Nigerian military came to my village to intimidate, harass innocent civilians who are unarmed. I was sleeping. It was their siren that woke me up from my sleep and I

enquired what was happening and I was told that the army was coming to my house. I looked through the window from my bedroom towards the junction and I saw their armored personnel carrier. It drove past and then turned around and came back towards this direction and they started firing at the people who were protesting and asking them why are they coming to this place to harass peaceful people who have done nothing to deserve such humiliation. They started firing indiscriminately. So I was told that a few people injured. I saw two people who were bleeding profusely. I was told there were casualties And as it is their tradition, when they shoot people, they carry their bodies away. We didn’t want to get at those people that was why we prevented them from coming here. Their intention was to ransack my family home and we would not have that” he said.

This story began on Sunday,the 10th day of September,2017,when a report has it that the IPOB leader,Nanmdi Kanu was attacked in his home and 3 persons lost their lives. This same report was denied by the Nigerian military, and ever since then,the leader himself,Prince Nnamdi Kanu hasn’t said anything about the matter until now. Talking on the same matter,the IPOB leader also said that the Federal government wants to push his group to war but that he would not succumb to it.
Tags: governmentNews
Previous Post

Turkish Diplotmat sends a message to Biafrans:The Nigerian Nation is crossing the red line. Time to be together Biafra!

IPOB’s Lion Squad on the move to protect Nnamdi Kanu

IPOB's Lion Squad on the move to protect Nnamdi Kanu