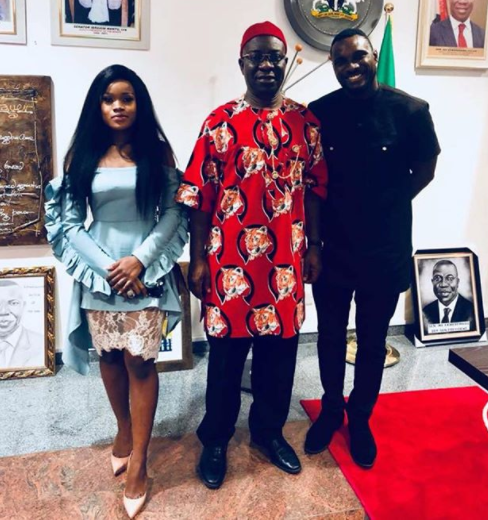 So what is the bone of contention here that deputy senate president ,His Excellency,Professor Ike Ekweremadu hosted the ex BBNaija housemates Cee-C and Angel in his office at the National Assembly Abuja yesterday?
Some people are seeing this invitation from a very negative angel,not seeing the BBNaija’s objectives as something that imparts value or some kind of achievement not to talk of celebrating it and so are not happy with it. See some reactions below:
Anonymous about 7 hours ago
Nigeria is finished! Governors, Senators celebrating idleness! What value has a BBN contestant added to the country? Is this serious business of governance?
Anonymous about 6 hours ago
This is not write! Why would you host people that went to enjoy their selves when there are orphans and widow to be hosted? well,it’s your money but please try to help people that needs it the most..
Anonymous about 6 hours ago
Where were all these politicians when the best graduating student in UNN with a CGPA 4.88 was only given N10,000 by GTB. I really pity this country. How we celebrate nonsense.
Why do majority not like the person of Cee-C? Is it because Cee-C was termed a troublesome wahala girl in person? Is it because almost everyone sees her as being rude,disrespectful,insulting and abusive in the house?
But well,there is someone else who loves CeeC’s awful characters so much enough that he couldn’t hide it.
To express how much he appreciates and respects this no nonsense lady and whom many have called a respecter of nobody,he honorably invited her with her housemate Angel in order to recognize with her. What is wrong with that Nigeria?
Come to think of it. Did Imo state governor not do more than that for Miracle the winner of the ex BBNaija and even honors him with Ambassadorship in his state?
Why is no one complaining about that? Miracle was the winner and Cee-Ce was the last girl standing! Miracle was overly romantic and never controlled his sexual urge in the house and we saw him showing his 2 round figures wide nude in bathroom,bedroom,in the kitchen and everywhere else with the girl of his kind called Nina and yet he was highly welcomed by his state governor with a very highly expensive rewards and no one is talking?
Cee-C you say has attitude problem but she is still winning the hearts of royalty and honorable men in big places! Yes darlyn…everyone has their peculiar characters but what is bad and really bad is when one is not proud of his personal makeup and hides it,pretending to be whom he is not.
Always be your person! You never can tell where it will take you to tomorrow!!
Maybe the White House…hahahaha!!!
Tags: News
Previous Post

By Saying ”African Slavery was A Choice” This Was What Kanye West Got From Black Americans Celebrities and Friends. Read Here

Michelle Obama Gives The Most Touching Speech At Temple University That Could Inspire You.See Here

Michelle Obama Gives The Most Touching Speech At Temple University That Could Inspire You.See Here