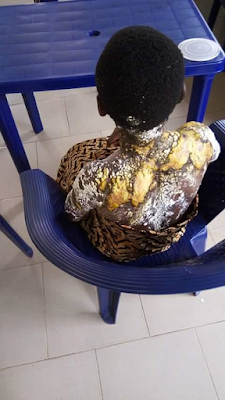 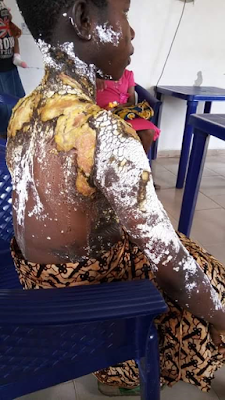 Child domestic abuse can be seen in various ways. In many of our stories,we have reported certain situations where mothers give away their children to people who are not in anyway related to them to live as house keepers,only for theses children to be abused without any recognition. In other stories,we see how children are tricked to live with one auntie or the other in big cities with a promise that they would be sent to school,only for these children to be sent hawking articles on the street. Here in this story,we have another form of  child domestic abuse,and you may be wondering what the little girl in the picture is suffering from!!!

CHILD DOMESTIC ABUSES
The picture above shows a little girl of 11 years old. Her name is Chika. In case you are wondering if that is an action of acid or hot water,yes,it is a pure real hot water,that was doused on little Chika, Unlike other stories where wicked madams of the house would do the same,this wicked and heartless action,comes from an angry neighbor. Yes,Chika’s neighbor! The neighbor,one Mrs. Obinna,was quarreling with Chika’s mother as they would always do since they both live in face to face compound. Mrs. Obinna called Chika’s mother a prostitute,and Chika,like some defensive children would always do,vented on Mrs.Obinna not to call her mother a prostitute again. Then Mrs. Obinna drag Chika to the kitchen and doused a pot of boiling water on her body. That was how Chika, a primary 6 pupil became a victim of child abuse.
ARE CHILDREN TO BLAME FOR DOMESTIC ABUSE?
A lot of people would blame little Chika for this abuse.but I say no,it is not wise! For crying out loud,the only person Mrs.Obinna should have problem with is Chika’s mother and not Chika herself. The truth is that,for not being able to douse on a fellow woman,Mrs. Obinna decided to vent her anger on the daughter of her victor.
Children have always been vulnerable to abuses such as this.Poor them! If only Chika’s mother knew this fact,she would have asked her to go in and luck herself up in their house,while she settles her issue with Mrs. Obinna. Now,her daughter Chika has become the victim of circumstance,having used her head to break the coconut! Anyways,the good news is that this case has atrracted the attention of Imo state government,and Mrs.Obinna is already paying the price of her wicked act against an innocent child,whose heart only beats to protect the image of her mother,her support and source of her hope.
Let us protect the life of our children and say no to every form of child abuse!!!
Tags: AbuseAdvice Tips
Previous Post