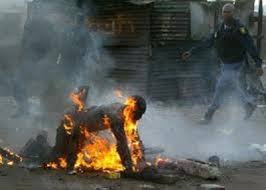 Burn alive for stealing?
Burning people in fire for stealing, is like a story told by Jane and jack, in books and fairy tells. It is true. And very true! Men,women,and recently a news about a young man having being burnt in fire somewhere in Lagos, for  stealing a telephone in a telephone business centre,has gone viral on news. In a simple term,stealing is taking something that does not belong to one,without the concept or permission of the owner, either in his presence or absence,through force or subtle means. Of course,stealing is a sin and crime against God in heaven and humans on earth. Stealing can mar the virtue of a family, so much that even the reputation of  that family is dragged to the mud and every member of same family reckoned with stealing is condemned,whether he is a stealer,or not.

IS IT RIGHT TO BURN THIEVES IN FIRE?

Okay, let’s talk real now on the issue of burning thieves in fire for stealing. We know that it is very wrong to steal, we also know what pains it causes victims whose items are stolen as well. Whether they are thieves or armed robbers,we know that they are wicked and heartless. Yes, many times this people have taken the lives of many innocent victims, and send many others to their early grave. But hey,can burning thieves in fire justify their wicked and ruthless deed? Let’s take a closer look! A good account has shown that many armed robbers and thieves have been caught and set ablaze in fire,and yet,not any thief is able to change, or turn away from stealing. This is to prove that burning thieves in fire can not put to stop stealing, but making doers who take the law into their hands become partners in crime.
A serious thought of people burning armed robbers or thieves in fire tells me that the people who burn thieves in fire are worse and more heart hardened than the thieves themselves. Yes,if they claim that stealing is bad,why would they not see that taking lives of people is even worse? These are people who have straws in their eyes,but instead of removing it,ask that others who have pins in their eyes should remove them. The law,I can remember well says that no one should take laws into his hand! So for those who burn thieves in fire for stealing, what have they done? Every eye has seen, and hearts have testified that this is injurious abuse!

The Spirit Of Homos*uality,The Way Out