by JoJo
in Hot Topics
0 0
0
0
SHARES
0
VIEWS
Share on FacebookShare on Twitter
”Is Bukola Saraki also a sponsor of IPOB”?-Ayo Fayose 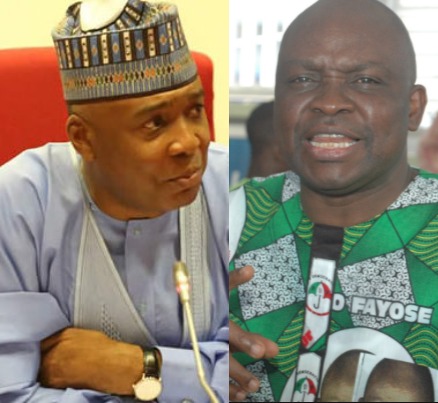 On Monday morning being 18th of September,the news release says that the president of the senate,Bukola Saraki has condemned the declaration of of the federal government that

the indigenous people of biafra IPOB is a terrorist group. He Saraka condemns the declaration and also says that is it unconstitutional to say so!

On the same hand too,the governor of Ekiti state,Ayodele Fayose was also accused by members of APC of sponsoring IPOB. Below is the evidence of their defence:
“Now that the Senate President, Bukola Saraki has come out to openly say that categorization of IPOB as a ‘terrorist organisation’ by the military is unconstitutional, is the APC also going to accuse him of sponsoring IPOB?”
“It is on record that on June 10, 2013, it was widely reported in the media that the current Minister of Information, Alhaji Lai Mohammed, who was the National Publicity Secretary of Action Congress of Nigeria (ACN) said that the proscription of Boko Haram was against the constitution, that it stifled the press and tampered with the fundamental human rights of Nigerians.
“It is also on record that in June 2013, President Buhari told the Federal Government to stop the clampdown of Boko Haram insurgents, accusing the government of killing and destroying houses belonging to Boko Haram members while the Niger Delta militants were given special treatment.
“Should we now say that Lai Mohammed and President Buhari sponsored Boko Haram because they spoke against the federal government’s clampdown on the insurgents then?”
”Herdsmen have sacked a whole community in this country, they killed over 1,000 Agatus in Benue State and have destroyed people’s farmlands across the country, has any of the herdsmen been arrested? Has any conceited effort been made by the federal government to curb the menace of the Fulani herdsmen?”
“If because I spoke against the wanton killings carried out by the military in the Southeast, the APC is saying that I’m funding IPOB, was I the one funding the people of Southern Kaduna when I condemned the killings there?
“Was I funding the Agatus in Benue State when I condemned their killings by Fulani herdsmen? Was I funding the Shiite Muslims when I condemned the killings of El-Zakzaky followers in Zaria and his continued detention?
“Mine is a mission for a Nigeria where no one will be treated like a second class citizen and we can only achieve that if we have leaders that will not be a champion of nepotism like President Buhari.”
Hmm,APC,what’s your reaction on this evidence presented against you by governor Ayo Fayose? Our ears are open!!!
Tags: News-hit
Previous Post