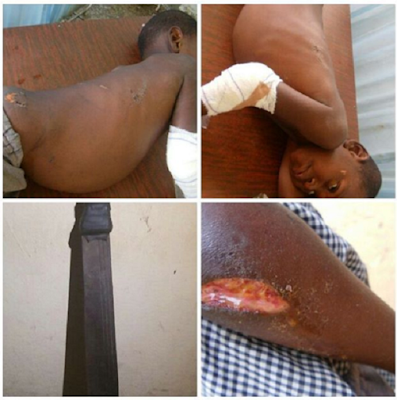 Can you imagine the headline story? A 6 year old boy having been brutalized because he bought  bread for his step father instead of buying him cigarette? What then should be the judgement to the step father of this child for this brutality and evil act? It’s so difficult to say but,he surely would and will pay for this atrocity!

WHAT ARE THE CAUSES OF BRUTALITY?
To start with,any acts of brutality or atrocity are usually attributed to the devil. In the case of this act for example,the step father of the victim accused the devil as the cause of the problem. ”How could I have done this to my own child in my right senses? Please forgive me,it is the work of the devil” the step father of the boy pleaded. Where was the devil at the time this was happening? In fact the devil was in his resting place doing what he knows how to do best whereas the man was acting all alone,by himself. We didn’t see anything push him at all,not even the devil he claimed!

LACK OF SELF CONTROL: We can understand that it is painful to ask a child to do something and he leaves it and do another thing. Yes,the step father asked his little boy to buy him cigarette only for the boy to buy bread and brought home. The act of this little child shows that he must have been hungry and all his mind could tell him like a child is to buy bread. What could be wrong with this? A good father seeing this would rather be happy knowing that his child could get food when hungry. Why should a father even send a little child as old as 6 to buy him cigarette? Isn’t this a child abuse? Okay,fine,the boy made a mistake by buying bread instead of cigarette,but is this brutality a course of justice for the action?

LACK OF HUMAN FEELING : Anyone who has feelings for humans will hardly inflict injuries in the flesh. What crime can a child of 6 years commit to make him deserve this atrocious treatment? That he bought bread instead of cigarette. This is very much unfair!

People especially Africans like to raise a lot of abuses on children in the name of of correcting them. But no,this is absolutely not correction. For correction goes with love and understanding. What is love in what this step father has done to his step son? How understandable is it that a man brutaled a little child with machete,simply because the child bought bread instead of cigarette for him? This is questionable and unreasonable!!!

monikmotivational.com: Should you worry about your appearance? -appearanc…